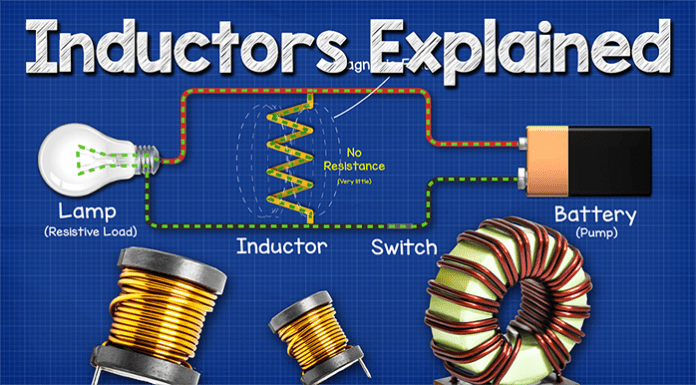 Remember Electricity is dangerous and can be fatal, you should be qualified and competent to carry out any electrical work.

What Is An Inductor?

An inductor is a component in an electrical circuit which stores energy in its magnetic field. It can release this almost instantly. Being able to store and quickly release energy is a very important feature and that’s why we use them in all sorts of circuits.

In our previous article we looked at how capacitors work, to read it CLICK HERE.

How Does An Inductor Work?

First, think about water flowing though some pipes. There is a pump pushing this water which is equivalent to our battery. The pipe splits into two branches, the pipes are the equivalent to our wires. One branch has a pipe with a reducer in it, that reduction makes it a little hard for water to flow through, so it’s equivalent to resistance in an electrical circuit.

The other branch has a water wheel built in. The water wheel can rotate and the water flowing through it will cause it to rotate. The wheel is very heavy though so it takes some time to get up to speed and the water has to keep pushing against it to get it to move. This is equivalent to our inductor.

As the water flows; it reaches the branches and has to decide which path to take. The water pushes against the wheel, but the wheel is going to take some time to get moving and so it’s adding a lot of resistance to the pipe making it too difficult for water to flow through this path, therefore the water will instead take the path of the reducer because it can flow straight through and get back to the pump much easier.

When we turn off the pump, no more water will enter the system, but the water wheel is going so fast it can’t just stop, it has inertia. As it keeps rotating it will now push the water and act like a pump. The water will flow around the loop back on its self until the resistance of the pipes and the reducer slows the water down enough that the wheel stops spinning.

We can therefore turn the pump on and off and the water wheel will keep the water moving for a short duration during the interruptions.

We get a very similar scenario when we connect an inductor in parallel with a resistive load such as a lamp.

When we disconnect the power supply, the inductor is going to continue pushing electrons around in a loop and through the lamp until the resistance dissipates the energy.

What’s Happening In The Inductor For It To Act Like This?

When we wrap the wire into a coil, each wire again produces a magnetic field but now they will all merge together and form a larger more powerful magnetic field.

In reality it’s going to happen incredibly fast, we’ve just slowed the animations down to make it easier to see and understand.

Why Does It Do This?

So when the circuit goes from off to on, there will be a change in current, it has increased. The inductor is going to try to stop this so it creates an opposing force known as a back EMF or electromotive force which opposes the force which created it. In this case the current is flowing through the inductor from the battery. Some current is still going to flow through, and as it does, it generates a magnetic field which will gradually increase. As it increases more and more current will flow through the inductor and the back EMF will fade away. The magnetic field will reach its maximum and the current stabilises. The inductor no longer resists the flow of current and acts like a normal piece of wire. This creates a very easy path for the electrons to flow back to the battery, much easier than flowing through the lamp, so the electrons will flow through the inductor and the lamp will no longer shine.

When we cut the power, the inductor realises there has been a reduction in current. It doesn’t like this and tries to keep it constant, so it will push electrons out to try and stabilise it, this will power the light up. Remember, the magnetic field has stored energy from the electrons flowing through it and will convert this back into electrical energy to try and stabilise the current flow, but the magnetic field will only exist when current passes through the wire and so as the current decreases from the resistance of the circuit, the magnetic field collapses until it no longer provides any power.

If we connected a resistor and an inductor in separate circuits to an oscilloscope, we can visually see the effects. When no current flows the line is constant and flat at zero. But when we pass current through the resistor, we get an instant vertical plot straight up and then it flat lines and continues at a certain value. However, when we connect an inductor and pass current through it, it will not instantly rise up, it will gradually increase and form a curved profile, eventually continuing at a flat rate.

By the way we’ve covered current in detail in a previous article, do check that out HERE.

Inductors in circuit boards will look something like below.

Basically, just some copper wire wrapped around a cylinder or a ring. We do get other designs which have some casing over, this is usually to shield its magnetic field and prevent this from interfering with other components.

We will see inductors represented on engineering drawings with symbols like these.

Something to remember is that everything with a coiled wire will act as an inductor that includes motors, transformers and relays.

What Do We Use Inductors For?

How To Measure Inductance

You can’t measure inductance with a standard multimeter although you can get some models with this function built in, but it won’t give the most accurate result, that might be ok for you it depends what you’re using it for. To measure inductance accurately, we need to use an RLC meter. We simply connect the inductor to the unit and it will run a quick test to measure the values.

Area of a rectangle