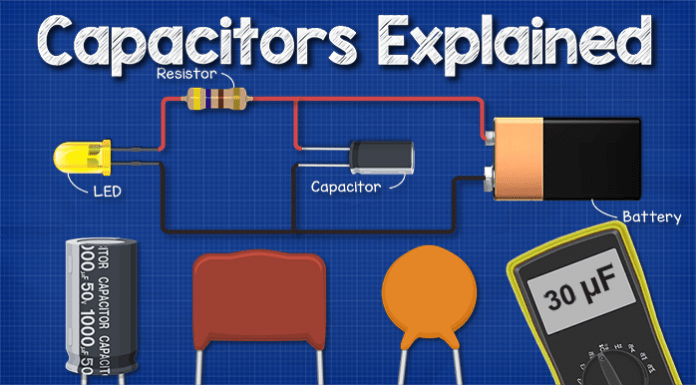 Capacitors Explained. Learn how capacitors work, where we use them and why they are important.

Remember electricity is dangerous and can be fatal you should be qualified and competent to carry out electrical work. Do not touch the terminals of a capacitor as it can cause electric shock.

What is a capacitor?

A capacitor stores electric charge. It’s a little bit like a battery except it stores energy in a different way. It can’t store as much energy, although it can charge and release its energy much faster. This is very useful and that’s why you’ll find capacitors used in almost every circuit board.

How does a capacitor work?

I want you to first think of a water pipe with water flowing through it. The water will continue to flow until we shut the valve. Then, no water can flow.

If, after the valve we let the water flow into a tank, then the tank will store some of the water but we continue to get water flowing out of the pipe. When we close the valve, water will stop pouring into the tank but we will still get a steady supply of water out until the tank empties. Once the tank is filled again, we can open and close the valve and as long as we do not completely empty the tank, we get an uninterrupted supply of water out the end of the pipe. So we can use a water tank to store water and smooth out interruptions to the supply.

In electrical circuits, the capacitor acts as the water tank and stores energy. It can release this to smooth out interruptions to the supply.

Inside a basic capacitor we have two conductive metal plates which are typically made from aluminium or aluminium as the Americans call it. These will be separated by a Dielectric insulating material such as ceramic. Dielectric means the material will polarise when in contact with an electric field. We’ll see what that means shortly.

There is now a build up of electrons on one side, this means we have stored energy and we can release it when needed. Because there are more electrons on one side compared to the other, and electrons are negatively charged, this means we have one side which is negative and one side which is positive, so there is a difference in potential or a voltage difference between the two. We can measure this with a multimeter.

Voltage is like pressure, when we measure voltage we’re measuring the difference or potential difference between two points. If you imagine a pressurised water pipe, we can see the pressure using a pressure gauge. The pressure gauge is comparing two different points also, the pressure inside the pipe compared to the atmospheric pressure outside the pipe. When the tank is empty the gauge reads zero because the pressure inside the tank is equal to the pressure outside the tank so the gauge has nothing to compare against. Both are the same pressure. The same with voltage, we’re comparing the difference between two points. If we measure across a 1.5V battery then we read a difference of 1.5V between each end, but if we measure the same end we read zero because there’s no difference, it’s the same.

Coming back to the capacitor, we measure across and read a voltage difference between the two because of the build up of electrons. We still get this reading even when we disconnect the battery.

If you remember with magnets, opposites attract and pull towards each other. The same occurs with the build up of negatively charged electrons, they are attracted to the positively charged particles of the atoms on the opposite plate, but they can’t ever reach them because of the insulating material. This pull between the two sides is an electric field which holds the electrons in place until another path is made.

We use capacitors everywhere. They look a little different but they’re easy to spot. In circuit boards they tend to look something like this and we can see them represented in engineering drawings like this. We can also get larger capacitors which are used for example on induction motors, ceiling fans or air conditioning units and we can even get enormous ones like this which are used to correct poor power factor in large buildings.

The other value is our voltage which we measure in volts with a capital V, on the capacitor the voltage value is the maximum voltage the capacitor can handle.

This capacitor is rated at a certain voltage and if I exceed this value then it will explode.

Most capacitors have a positive and negative terminal. We need to make sure that the capacitor is connected correctly into the circuit.

Why we use them

One of the most common applications of capacitors in large buildings is for power factor correction. When too many inductive loads are placed into a circuit, the current and voltage waveforms will fall out of sync with each other and the current will lag behind the voltage. We then use capacitor banks to counteract this and bring the two back into alignment.

Another common application is to smooth out peaks when converting AC to DC.
When we use a full bridge rectifier the AC sine wave is flipped to make the negative cycle flow in a positive direction, this will trick the circuit into thinking it’s getting direct current.

But, one of the problems with this method is the gaps between the peaks. So we use a capacitor to release energy into the circuit during these interruptions and that will smooth the power supply out to look more like DC.

How to measure capacitance with a multi meter

You should be very careful with capacitors as they store energy and can hold high voltage values for a long time even when disconnected from a circuit. To check the voltage, we switch to DC voltage on our meter and then connect the red wire to the positive side of the capacitor and the black wire to the negative side. If we get a reading of several volts or more then we should discharge that by safely connecting the terminals to a resistor and continue to read the voltage. We want to make sure it reduced down into the millivolts range before handling it else we can get a shock.

To measure the capacitance, we simply switch the meter to the capacitor function. We connect the red wire to the positive side and the black wire to the negative side. After a short delay the meter will give us a reading. We will probably get a reading close to the stated value but not exact.

For example, this one is rated at 1000 microfarads but we read around 946.

This one is rated at 33 microfarads but we measure around 36.

How to combine multiple cells in excel

Area of a Parallelogram