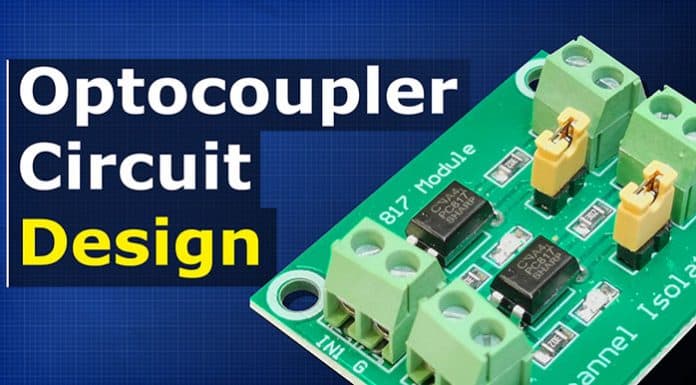 Learn about optocouplers. In this article we’ll look at how they are used to control circuits, how they work and also how to design some simple optocoupler circuits to show the working principle.

What is an Optocoupler?

Optocouplers are integrated electronic components that look something like this.

They are also known as optoisolators, optical isolators and photocouplers. In this version we have the main body with 4 pins. Pin 1 is the anode, pin 2 in the cathode, pin 3 is the collector and pin 4 is the emitter.

We also have a small circular indentation in the body next to pin 1, and we use this is identify the different pins. On the body we also have some text, this is the part number. We use this to identify the type of optocoupler and also find the manufactures datasheet.

Why is that important? Because voltage spikes and noise on one circuit will not destroy or disrupt the other circuit. So, our circuits are protected. They will also only allow electrons to flow in one direction because of the semiconductor materials inside.

The two circuits can therefore use different voltages and currents because of the separation. We can expand the capabilities of the device by adding other components such as a transistor to the output of circuit two. This allows us to control even higher voltages and currents and automate circuit control.

How Does it Work?

There are a few variations of optocouplers but we’re going to stick with the basic photo-transistor version for this article. When we look at the symbol of this optocoupler, we see there is an LED symbol on the left and on the right side the symbol looks very similar to a transistor, that’s because it is a modified version of a transistor known as a phototransistor. The terminals are named collector and emitter, just like a normal transistor, except we’re missing the base pin.

By the way we have covered how transistor work in detail in our previous article, click HERE.

So, when circuit 1 is complete, the LED turns on. This shines a beam of light across, which hits the transistor. The transistor detects this and turns on, allowing current to flow in circuit 2. We simple control this by turning the internal LED on and off. The phototransistor acts like an insulator, blocking the flow of current, unless it’s exposed to light.

The LED and transistor are both enclosed within the case so we can’t see them, but we can see how they work with these simple circuits, which we will make later on in the article.

So how does the LED turn the transistor on? Inside the phototransistor we have different layers of semiconductor materials. There are N type and P type, which are sandwiched together. The N type and P type are both made of silicon, but they have each been mixed with other materials to change their electrical properties. The N type has been mixed with a material which gives it lots of extra as well as unneeded electrons. These are free to move around to other atoms. The P type has been mixed with another material which has fewer electrons. So, this has lots of empty space where electrons can move to.

So, we can control a secondary circuit just be using a beam of light.

This works because of the semiconductor material. In normal wires the copper is the conductor and the rubber is the insulator. Electrons can easily flow through the copper but they can’ flow through the rubber insulator. Looking at the basic model of a metal conductor, we have the nucleus at the centre with is surrounded by a number of orbital shells which hold the electrons. Each shell holds a maximum number of electrons and an electron needs a certain amount of energy to be accepted into each shell, those furthest away from the nucleus have the most energy.

The first circuit we will look at uses a light dependant resistor and a white LED. The LDR varies its resistance depending on how much light it is exposed to. In darkness it has a very high resistance, in bright light it has very low resistance.

This white LED is rated for 20mA, if I connect this to the DC bench power supply, we see it requires 3V to achieve the 20mA.

When I test this LDR, we see that with a dim light it’s around 40 kiloohm resistance. When I hide it in my hand it’s around 4 megaohm and with two hands completely covering it, it’s around 9 megaohms. But, when I shine the white LED onto the LDR, its around 66 ohms. If I wrap my fingers around them, it’s around 70 ohms.

So, on the primary circuit we need a white LED which has a voltage drop of 3V and uses 0.02A of current. We will control this with a switch and use a 9V battery to power the circuit. The resistor is found by 9V subtract 3V for the LED, equals 6V. This will be the voltage drop of the resistor. The circuit current is 0.02A so 6V divided by 0.02A is 300 ohms.

I place the components into the circuit and it looks like this. The current will flow through the circuit like this, shown using conventional current. When I press the switch the LED illuminates.

On the secondary side, we have a red LED with a voltage drop of 2V and a current of 0.02A, this will turn on to indicate the circuit is working. We place the LDR opposite the white LED, this will provide a resistance of approximately 70Ω ohms when exposed to light. To find the resistor for the LED we simply need to do 9V subtract 2V which is 7V. 7V divided by 0.02A is 350 ohms. 350 subtract 70 ohms for the LDR is 280 Ohms. Instead of this, I’m going to use two 150 ohm resistors which equals 300 ohms. So, assuming the LDR is 70 ohms, we have 370 ohms of resistance. 7V divided by 370 ohms is 0.019A.

So, I place the components on the secondary side of the circuit and it looks like this. Notice the red LED is on, that’s because the LDR is receiving ambient light from the room. If you take some electrical tape, cut off a few small pieces and wrap them around both the LDR and the LED.

This blocks the ambient light of the room and the LED is now off. When I press the button on the primary circuit, the white LED turns on, this shines the light on the LDR which turns the red LED in the secondary side on.

The problem with circuit 1 was that natural light activated the circuit. So, we will use an infrared emitter and receiver instead, for this circuit.

On the primary side we have an infrared emitter, the one I’m using is rated for 30mA but I’m going to use less current than this. When I test the LED we see at 1.2V it has a current of 0.02A. So, we will use this value. By the way, if you look at this with your eye you wont see any light because it’s infrared and humans can’t see infrared, so you’ll assume it’s off but it’s not. If you use the camera of your phone, you’ll see it is actually on. You can test this yourself using your TV remote as it also uses infrared.

When I connect the components into the circuit it looks like this. When I press the switch, the red LED turns on and the infrared LED emits a beam of light.

I place these components into the circuit and it looks like this. The emitter and receiver are opposite and in close proximity. When I press the switch, the primary red led turns on and the emitter shines a beam of infrared light at the receiver. The receiver detects this and allows current to flow so the secondary side red led also turns on.

I place the components into the circuit board and it looks like this. When I press the switch the red LED will turn on.

So I place the components into the circuit and they look like this. The secondary side is off, but, when I press the switch, the primary side red led turns on, the led inside the optocoupler turns on and the beam of light hits the internal phototransistor, which allows current to flow in the secondary side so the secondary red led is now on.

How a Battery Works