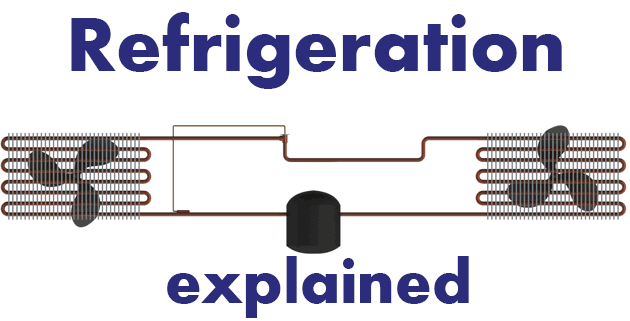 A fluid, known as a refrigerant, moves between four key stages in refrigeration cycle. As it does so, it changes in pressure and temperature, this allows the fluid to absorb heat from one place and discharge it in another.

For a refrigeration cycle to work, it requires five main components. The four key stages of temperature and pressure change occur within these components.

Next this superheated high pressure gas enters the condenser, the condenser is a coil of pipework which runs between metal fins.

The metal fins help carry heat away from the pipe via conduction. A fan also blows air across the coil and fins to remove the heat via convection.

To cool a room down, the heat within that room must be collected and dumped somewhere else. The refrigeration cycle collects this heat by sending the refrigerant at a low temperature and pressure into the evaporator within that room.

The expansion valve restricts the flow of refrigerant through use of an internal spring loaded valve which is connected to a diaphragm.

The final key stage of the refrigeration cycle is the component called the evaporator. This is similar to the condenser in construction, but the refrigerant behaves differently inside.

In the evaporator, the refrigerant enters as a cold, low pressure liquid but quickly begins to boil. The refrigerant has a very low boiling temperature, typically of -23ºc (minus twenty-three degrees Celsius). As the refrigerant boils it evaporates, this evaporation picks up the rooms heat and carries it away towards the compressor where the refrigeration cycle will begin again.

Why do cars need a battery?

What is a diode?