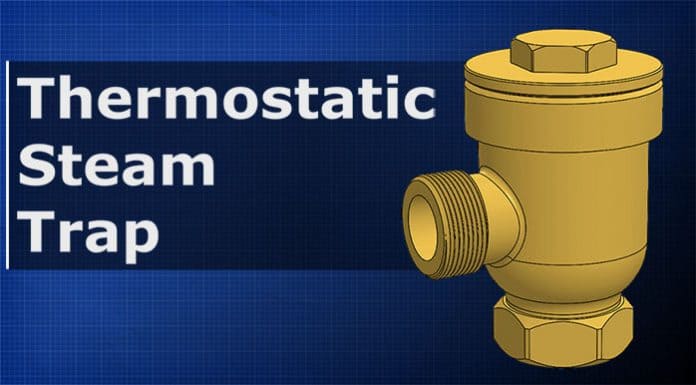 This is a thermostatic radiator trap and we find them installed in 2 pipe steam heating systems. But why do we need them and how do they work? That’s what we’ll be covering in this article which is kindly sponsored by State Supply. Checkout www.statesupply.com to see the many different types of steam traps available, you can shop for parts and accessories, or speak to a knowledgeable steam system specialist about your specific needs. Just click HERE to learn more.

What is a Thermostatic Radiator Trap?

The thermostatic radiator trap looks something like this, although there are many variations.

These valves are connected to the low side of a steam operated radiator. This is a mechanical valve which allows air and water to pass through, but automatically acts to prevent steam passing through. We’ll see how it does that a little later in this article.

Steam heating systems can be found in residential, commercial and even industrial sites. They’re very common in large campuses and larger older buildings.

These systems do not require pumps, they use the steam itself to distribute heat around the building. Although we might find a condensate pump on the return line. So why do we need a thermostatic radiator trap on our radiators. To answer that, we first need to understand how the steam system works.

If we add thermal energy, or heat, to some water at standard atmospheric pressure, its temperature rises, until it reaches 100OC or 212OF. At this point it begins to boil and evaporate into steam. The thermal energy is carried away by the steam.

That’s because the water molecules are expanding and taking up more space. In cool water, the molecules are tightly packed together, but as more thermal energy is added, the water molecules become excited and vibrate rapidly which increases their volume. It increases so much that one unit of water can expand into steam, approximately 1,600 times its original volume, when at standard pressure.

If the volume of the vessel is fixed and more thermal energy is added, the water molecules are going to become excited and move faster. They will collide with the walls of the vessel more frequently and with more force. This increases the pressure inside the vessel.

The pressure pushes the steam, it naturally tries to reach a location of lower pressure. We can use that pushing force to distribute the thermal energy through pipes, to radiators and then back to the boiler.

In a typical 2 pipe steam heating system. The boiler is adding thermal energy and heating the water which turns it into steam. The pressure is pushing the steam along the pipe, to a radiator.

The radiator heats the ambient air of the room, so the thermal energy is transferred from the steam, through the radiator wall and into the air of the room. As the air is heated, it rises up and cooler air then takes its place, this repeats continuously.

The steam is giving away its thermal energy, as it does so, it condenses back into a liquid. The high pressure of the system is going to push this water back to the boiler, where it will be reheated and repeat the cycle.

Mixing the steam with the condensate will cause many problems for the system also, such as steam binding and steam hammer, which can be catastrophic for the system, so we must avoid this. One way to do that is through a thermostatic radiator valve.

There are a few different designs for thermostatic steam traps, but we’re going to focus on the bellow type in this article.

When we look at the valve, we have the main body with an inlet and an outlet. On the top is a hexagonal bolt head which allows us to disassemble the unit for maintenance and repairs. We’ll discuss that later in the article.

When we look inside, we find a set of bellows. These push a plug into the seat of the valve, just before the outlet. The bellows are secured to the top of the trap.

The bellow is a sealed unit that contains a liquid which vaporises at, or close to, the boiling point of water. The liquid inside the bellow is typically water or a water and alcohol mixture. We use this, because, as we know, water expands rapidly as it is heated. So, we can use this to control the valve automatically.

The bellow is made from a metal body with metal pleats or corrugations, that can extend or contract, as the internal pressure from the expanding liquid, increases or decreases.

Steam exists above 100OC or 212OF, which is above the boiling point of water. So, when steam comes into contact with the bellow, the water inside the below flashes to steam almost instantly, causing a rapid increase in volume. This causes the bellows to extend, and we can use that to block the outlet of the valve.

On system start up the bellow is open and the trap is full of condensate. As steam enters the trap, it heats the bellow.

The water in the bellow is heated, which causes it to flash into steam. The pressure inside the bellow increases. As the bellow is secured at the top, to the trap body, it can only expand downwards and so it plugs the outlet and stops any steam from flowing into the condensate line.

This gives the steam in the radiator a chance to give away it’s heat to the room, and cool down until it condenses into a liquid. The liquid condensate fills the trap body and draws the heat out of the bellow. This allows the pressure inside the bellow to reduce and the bellow shrinks to its original length and position, unblocking the plug and opening the valve. The steam then pushes the condensate out and the trap closes and repeats the cycle.

During operation the bellows are constantly expanding and contracting, and like all mechanical things, they will eventually fail.

In a typical building, with, say, 1,000 hours of heating per season. The trap might open and close about three times per minute. Thus, in a single heating season, the trap may be opening and closing about 180,000 times a year. After 5 or 6 years, the trap may have opened and closed more than one million times.

That is a lot of wear and tear on the thin mechanical bellows. Simple metal fatigue will destroy the trap after a few years. It’s like bending a piece of metal backwards and forwards on the same axis, it will eventually break.

Additionally, the corrosive nature of the condensate will cause the bellows to weaken. Typically, a steam trap only has a useful work life of say, three to five years.

Thermostatic radiator traps do not slowly stop working. When they fail it is instant and without warning. There is no slow deterioration in operation, so the bellows should be replaced as part of routine maintenance according to manufacturer’s recommendations.

When the bellow breaks, the water inside escapes and the bellows can no longer respond to changes in temperature. When bellows fail, the trap can either fail open or closed, depending on the type of construction.

With the open failure, when the bellow ruptures, it allows steam to pass through. This occurs because the bellows default length isn’t enough to close the valve. The bellow is filled with water and alcohol, this expands and forces the bellow to extend past its default position. So, when the bellow ruptures, it returns to its default length and the valve is left open, allowing steam to flow through, wasting energy and causing problems in the system. This can be hard to detect because the steam is still flowing through, so it will still heat the radiator.

Refrigerant types and their future