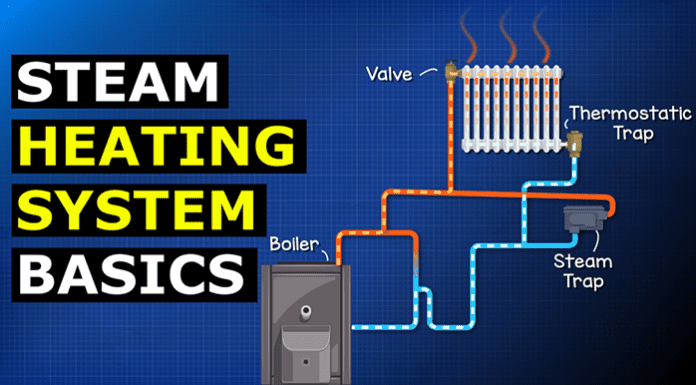 Scroll to the bottom to watch the YouTube tutorial

Steam heating systems can be found in residential, commercial, and even industrial sites. They’re very common in large campuses, especially larger, older buildings. These systems do not require pumps. Instead, they use the steam itself to distribute the heat around the building. Although we might find a condensate pump on the return line.

If we add thermal energy or heat to some water at standard atmospheric pressure, its temperature rises until it reaches 100 degrees Celsius or 212 degrees Fahrenheit. At this point it begins to boil and evaporate into steam. The thermal energy is carried away by the steam. If we capture and contain the steam by placing a loosely fitting lid over the vessel, we would see the lid rise up. If we fix the lid firmly to the vessel, we would see the internal pressure increase.

If the volume of the vessel is fixed and more thermal energy is added, the water molecules are going to become excited and move faster. They will collide with the walls of the vessel more frequently and with more force. This increases the pressure inside the vessel. The pressure pushes the steam. It naturally tries to reach a location of lower pressure.

We can use that pushing force to distribute the thermal energy through pipes to radiators and then back to the boiler. In a typical two pipe steam heating system, the boiler is adding thermal energy and heating the water, which turns it into steam. The pressure is pushing the steam along the pipe and to the radiator. The radiator heats the ambient air of the room so the thermal energy is transferred from the steam through the radiator wall and into the air of the room. As the air is heated, it rises up and cooler air and rushes in to take its place.

This will repeat continuously. The steam is giving away its thermal energy, as it does so it condenses back into a liquid. The high pressure of the system is going to push this water back to the boiler where it will be reheated and repeat the cycle. We only want condensate liquid returning to the boiler. We don’t want any steam getting into the return line.

This would be a waste of energy as it will warm the condensate liquid and also lose heat on the way back. We’ve paid to create the steam so we don’t want to waste it. Mixing the steam and the condensate will cause many problems for the system also, such as steam binding and also steam hammer. This can be catastrophic for the system, so we must try to avoid this. One way to do that is through a thermostatic radiator trap. By the way we have covered that in detail in our previous article HERE.

Area of a sector

DIY Centrifugal Pump – How to make a pump from wood