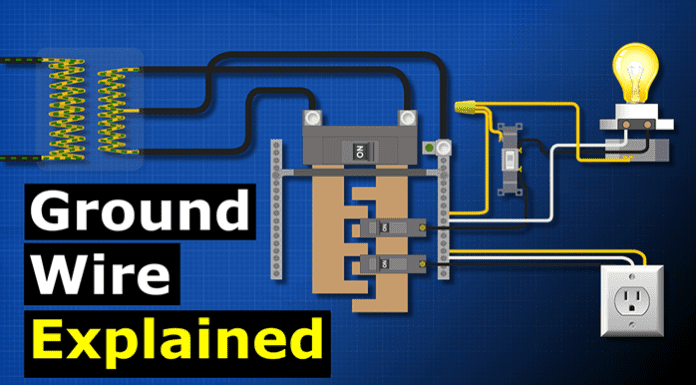 Ground wire explained. What is the purpose of the ground wire, what does it connect to, when is it used, why is it used.

It’s just there for an emergency path for the electricity to get back to the power source instead of it passing through you. The ground wire, in most cases is a bare copper wire. It’s uninsulated, but in some cases it is covered with a green insulation. This wire provides a very low resistance path directly back to the source, so electricity will prefer to travel along it because it’s easier and can get back quicker. Connected to the main panel, we will find a thick copper wire which leads out to a ground rod.

Ground Rod is buried into the ground outside near the property. This Rod is not used for ground faults. Its purpose is to dissipate static electricity and external high voltages, like lightning strikes. There is also a ground Rod connected to the neutral at the transformer. Many people think that during a ground fall electricity flows through the ground Rod and into the Earth.

So as we already have a very low resistance ground wire which provides a path directly back to the source, the ground fault is going to take this route. Instead, the electricity flows through the hot wire and into the light and then back through the neutral. But if the hot touch is the metal casing, then it will instead flow through the ground wire back to the panel through the buzz bar, and then back to the transformer via the neutral wire. The ground wire has a very low resistance, which causes a huge and instantaneous increase in current, which will trip the breaker. We therefore connect the ground wires to anything that could potentially become a potential path for electricity to leave its circuit, such as the metal pipes, the metal plates and the light switches and the outlets of their boxes.

We also need to run one to the outlets because often our appliances are made of metal or they’re covered with a metal casing. Things like washing machines and microwaves. When you look at a receptacle and plug, you’ll see that there is a hot terminal, a neutral terminal, and a ground terminal. The casing of something like a washing machine is connected to a ground wire in the lead, which goes to the plug through the receptacle and back to the panel to save you from an electric shock. Now, let’s say you’re outside with no shoes on and the ground or the soil is moist.

If you touch a hot wire, you could complete the circuit and the current may pass through you to get back to the supply. In this case, the resistance is going to be very high so the current might not be high enough to automatically flip the breaker and cut the power. This will likely lead to the person’s death.