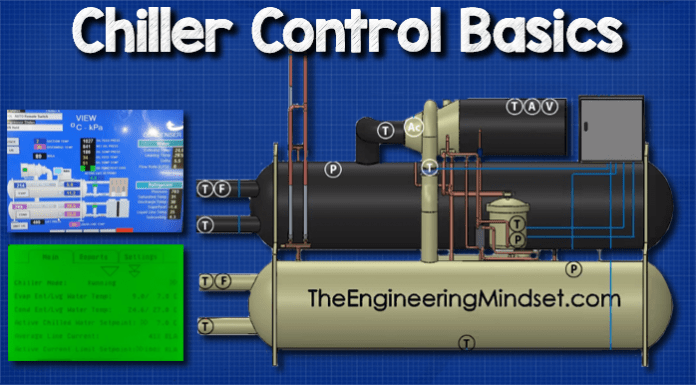 Chiller Controls. In this article we’re going to be taking a look at the controls of a chiller. Looking at where the controllers are located, what they do and how the sense the operation of the chiller as well as command the chiller to operate.

The controls box is usually mounted to the chiller in a lockable metal casing. Below you can see an example of the inside of a centrifugal chiller control panel. There are wires coming out of this controller and connecting to various sensors all over the chiller. It can also allow remote control access via the BM, building management system.

Why do we need the controls box?

The controls box houses the controller which is taking critical measurements from all over the machine, as well as relaying instructions. These not only help control the machine, they also protect the machine in the event of any fault. The controller usually logs the operational data for a certain amount of time in the machine, or they can be externally recorded, and these allow service engineers to diagnose the machine and make sure it’s working as it should do.

You can see an example of the chiller log data above from a chiller in static operation. There’s not much too look at here, but you can see you can go back a certain amount of time and you can diagnose the machine from the display unit as it will show peaks and dips in operational temperatures/pressure/current/opening% as well as fault alarms.

The display end will let you look into the live data that’s coming out of the chiller in a much more user friendly manner. You can see the various temperatures, pressures, and states and well as the load amps, lift, etc. The image above also has the chiller in alarm.

What is the chiller measuring?

The first thing the chiller needs to know is that there is water flowing in the evaporator and the condenser water loops. The chiller will not start, or should not start, if there is inadequate flow. This is to protect the chiller from freezing and bursting the internal heat exchanger tubes inside these vessels. If the water inside the tubes was too slow, it could freeze and split the pipes.

The chiller typically has some flow sensors connected on both the chilled water and the condenser water circuits, each chiller has it’s own sensors. If adequate water flow is detected, then the machine will be allowed to start.

Then the chiller also needs to know the temperature for both the incoming and outgoing water in chilled water loop and as well as the condenser water loop. So there’s going to be flow and return temperature sensors on each.

In this example we have a centrifugal chiller which uses vein guides to control the capacity of the chiller. These vein guides change in position to meet the required cooling capacity, so the vein guide actuators need to be measured and also controlled. We can add this control loop in as well (Ac).

The induction motor, which drives the chiller, is mounted on the back of the compressor and is a vital component of the chiller. Obviously we’re going to need to do some monitoring of this. The control panel will also be measuring the temperature of the induction motor coil winding, the amount of amps being pulled by the motor per phase as well as the voltage. If the voltage count or temperature was to become too high, then the motor could burn out. By monitoring these, the motor can protect itself. It can limit the amount of amps and it can even shut the motor off if a serious fault was to occur or preferably just before that would occur.

There are a series of codes programmed into the controller to lookout for potential problems. The operator can then be warned that the pressure and temperatures has exceeded or fallen below the threshold. It may even just stop the machine running. For example the chiller may trip on high pressure and cease to run for a certain amount of time to prevent damage.

The controller will likely also record the run hours and the amount of starts. It may record the run time since the last service. Most chillers can only start a certain amount of times per hour, especially large ones, and that’s to protect itself again. The inrush current into these motors is extremely large, so if the chiller was able to just turn on off, on off, on off, it could overload the circuits and motor as well as the buildings electrical distribution system.

If you watch the video we also include some examples of real world chiller controller screen shots with actual run data.

What is a Servo Motor and What Does It Do?