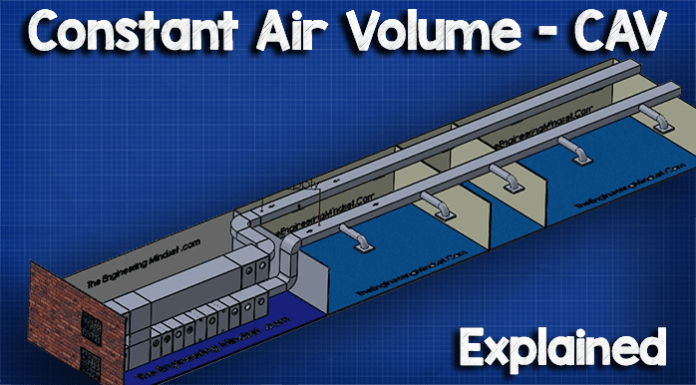 Constant Air Volume, CAV. In this article, we’re going to be looking at the CAV system. CAV stands from Constant Air Volume. CAV is a means of delivering conditioned air around a building. It’s becoming less common in new buildings simply because VAV, Variable Air Volume, systems are replacing them due to their superior zone control and much reduced energy consumption.

Scroll to the bottom to watch the YouTube tutorial on CAV systems.

Looking at a CAV system, we have a simple model of a small office below.

We have the AHU, Air Handling Unit, which is located within the plant room on the left side. Then we have the supply duct, which is taking all the fresh treated air from the AHU and delivering this throughout the building. The treated supply air exits the duct into the rooms via the diffusers. It circulates around the room and the used dirty air is then sucked into the return dict via a grille somewhere else in the room. This air will be returned back to the AHU where it can either be dispersed straight out to atmosphere or some of it can be recycled and reused.

Now, in this video, we’re not going to be looking inside the AHU to see the components as we have already covered this in other videos. If that is of interest to you, then I highly recommend you check out our “Fundamentals of HVAC” where we cover this in great detail.

CAV systems do have some limitations because the supply air temperature is varied, but, the volume flow rate (supply) of air is constant.

While the system runs, it provides air at a consistent and constant volume and only the temperature of that air changes. Typically, the air is provided at around 13 degrees Celsius, (55 degrees Fahrenheit), but this can be adjusted to suit the needs of the building. Now, as I said, the volume is constant but the amount of air which it provides is really going to depend on the size of the area that needs conditioning. The activity’s occurring within the rooms will dictate how much air needs to be delivered to a room.

One of the problems with the CAV system, is that everything connected to this AHU is classed as one zone, and that means all the rooms connected to it receive the same temperature air regardless of their heat load. So, if one room was a busy meeting room in the middle of summer which is full of people, it’s going to be generating a lot of heat. It also has solar thermal gain too. But with a CAV system, that room will receive the same air temperature as the empty room next to it. This means the zones are given a set amount of cooling regardless of their requirements. This is not efficient because it’s going to be wasting a lot of cooling energy, generating and providing cooling for no reason.

The fans would also run at 100% the entire time the system is running. Although you could fit some VSD/VFD Variable Speed Drives / Variable Frequency Drives, to reduce the motor speed.

It’s very difficult, but not impossible, to convert a CAV into a VAV system. It’s going to take a lot of time and effort. You have to change a lot of things and modify a lot of the controls for it. The conversion can unlock a lot of energy savings although a CAV is cheaper to install and easy to operate.

From this schematical representation of the CAV system, you can see how it’s connected. Notice that all of the rooms are connected to the main duct, and the only form of temperature control is in the main AHU. That means that all the rooms receive the same tempered air at a constant volume.

One way around this is to install terminal re-heaters. These are usually found in a metal box in the ceiling, before the diffuser. Typically these are electrical heaters. They could also be from the hot water system. These will reheat the air up to a higher temperature, but obviously that is very energy inefficient because you’re already cooling the air down in the AHU and now you’re paying again to heat that air back up. So, you’re wasting money on the cooling and then also on the heating.

Another option you might see out in industry is the dual duct CAV system.

It’s becoming increasingly uncommon to see this, you could still find it in some older buildings though. But basically, you have two ducts running and supplying the room, and one of these will be providing cold air and the other duct will be supplying warm air. This air is then mixed by some dampers in a box at each room just to suit the temperature inside. That return air is then also returned back to the AHU, ready to be recycled or dispersed out to atmosphere.

This system gives a much improved thermal control but there is little control of humidity. Again, it’s not particularly energy efficient either. As you’re supplying air through two streams, you have a lot of resistance which the fan is going to have to overcome. You’re also unnecessarily heating and cooling air which might be mixed.

Guide to Lighting and Power cables