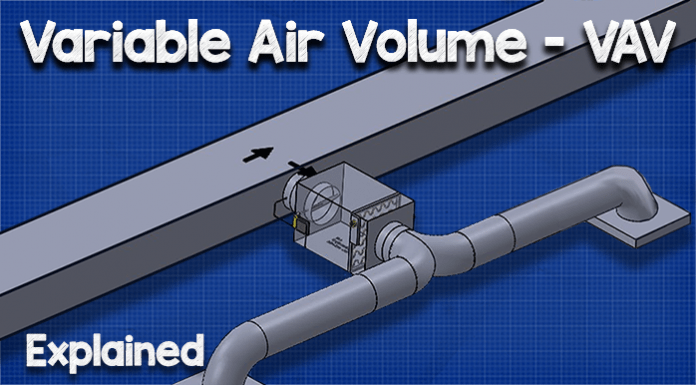 Variable Air Volume. In this article we are going to be looking at the VAV system. VAV stands for variable air volume. VAV systems are very common in offices. This is because they are much more energy efficient compared to the CAV model (constant air volume).

VAV allows zoning within the building. That’s ideal for most situations because every room in a building will experience a slightly different heating/cooling load. VAV systems allow each room to control the amount of cooling, and possibly heating, individually. Each room is supplied by the same main AHU and ducts. Different parts of the building may have dedicated AHU’s and ducts, for example the south and north sides of a building or selected floors depending on functionality.

In the illustration above, we’ve modelled a basic VAV system for an office.

In a VAV system the air is supplied from the AHU at around 13 degrees Celsius (55 degrees Fahrenheit). That air flows along the main supply duct and distributes into the room. Once the air has provided heating/cooling it will be sucked back into the return duct and flow back to the main AHU.

So the main difference in a VAV system, compared to a CAV system, is the VAV terminal. This is located just on the branch coming off of the main duct. Each VAV box serves a certain zone (room or group of rooms). The VAV box is connected via a cable to a thermostat which is located within the room, or the zone. The thermostat will indicate to the VAV terminal if it needs to increase or decrease the flow rate to meet the cooling demand.

You can see it’s a pretty basic box. There’s nothing too complex happening inside these. We have the controller located mounted onto the actuator. The actuator controls and rotates the shaft which is connected to the damper. The damper can modulate its position to control the air flow rate and thus the amount of air entering into the terminal box and into the zone.

The air enters at around 13 degrees Celsius or 55 degrees Fahrenheit typically, but this temperature can be adjusted via BMS. Sometimes that isn’t warm enough, so we might find an electrical reheater inside which will switch on to warm the air up as it passes through. You don’t necessarily have to have this inside, but it’s fairly common. They don’t necessarily have to be electric either, they could also be fed from the building LTHW hot water system or it could also be from say a heat pump or something like that. But for simplicity I’ve just left it as electrical reheater.

On the back of the VAV, at the inlet, we can find some tubes forming a cross shape. This is an air flow sensor. It is measuring the change in pressure across the device. From that it can calculate the average air velocity and thus the flow rate into the VAV terminal. Basically, there are some small pinholes on the front and also on the back of the tubes. If you imagine the supply air coming in and hitting the front side, then it’s going to impact on this surface and cause pressure. Therefore the front is going to have a high pressure side and the back side will be a low pressure point. You can find the differential pressure across the device, and if you average that for the size of the duct, and calibrate it, then you can calculate the flow rate of air entering into that box and zone.

The damper never closes fully, or at least typically it doesn’t, and that’s because you still need a certain amount of fresh air to enter into the space. If you suddenly got a higher heat gain within the room and the temperature of the room starts to rise above the desired set point, then the damper will start to open and this will allow more air into the space. Remember the air is about 13 degrees Celsius, 55 degrees Fahrenheit, so that will start to cool the room down and force all that hot air off into the return duct.

In the middle of summer when you’ve have all the solar heat gains coming through the windows and maybe there’s a meeting room which is full of people, there’s a lot of heat being generated in there, so the damper will open to 100% and this will let as much cold air in as possible. During the winter, or when there’s less people in the room, the damper’s position is further towards the closed position, remember not fully, and this modulates the cooling.

As a buildings ventilation system is connected to multiple VAV terminals, the VAV terminals are going to vary their load throughout the day as the dampers open and close. The fans in the AHU will be pushing the air into the supply duct, this will pressurised the duct. When many VAV dampers open the pressure in the duct will drop and when many of the dampers close, the pressure will rise.

To combat this, we will find a pressure sensor in the main duct towards the furthest point in the system. These will be connected to a VSD (VFD) Variable Speed Drive or Variable Frequency Drive. The VSD/VFD will be connected to the supply and return fans. The speed of the fans will be increased or decreased in response to the pressure in the duct. This will ensure an efficient operation.

You can also get some fan assisted VAV boxes. These are essentially the same, except the unit has an internal fan which will draw the air in from the space. That’s useful because the fan will keep a constant volume coming through the box. If the damper closes then less air will be entering the space, but the fan will ensure a constant turn over of air within the room. When the dampers are open the fresh air will be mixed with the recirculated air in the room.

Additionally, the fan assisted VAV will prevent cold air being dumped directly into the space and onto staff. This could make the person sick.

Area of an octagon