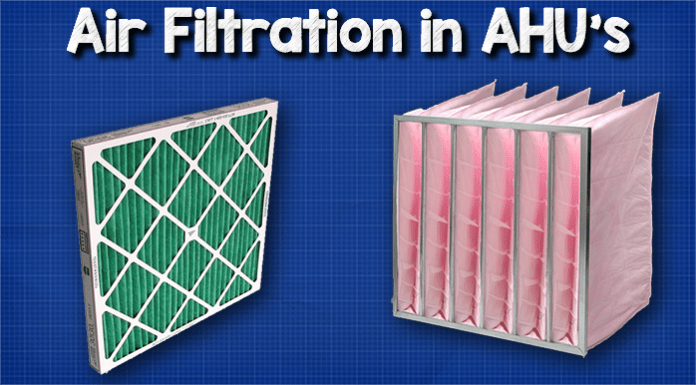 Air filtration in AHU’s. In this video we are going to be looking at the air filters within an air handling unit for HVAC systems.

Inside an AHU we will typically find two sets of filters. The first set is known as the primary filters and we also then have the secondary filters. These both have different functions in an air handling unit.

The filters are going to be one of the first things within the supply AHU, before any of the heating and cooling coils or fan and should be just after the dampers.

The primary filters are usually panel filters. These are there to catch the dust. They’re typically made with a pleated design which increases the surface area and allows it to catch much more dust and last a bit longer than if it were just a flat sheet. They’re usually made from a synthetic material with a cardboard outer frame and they’re held in shape with a wire mesh. Depending on the size of the AHU, you’ll usually have to buy these filters in pre-made sizes which will be slotted together to create a permeable wall covering the direction of air flow.

These filters generally slide out from the side, alternatively some are held in place with a latch allowing them to be removed in the direction of, or against, airflow.

Above is a comparison of a clean and dirty primary air filter. They’re quite effective at catching dust particles down to around four or five microns, but they can’t really catch anything less than say one or two microns.

As you can see, the filter will become absolutely covered in dust. In this case it has taken a few months to build up to this level, but that does depend on where your air intake is located and where your building’s located. If the AHU supplies a building in some busy industrial unit with lots of traffic and manufacturing, then the air is likely to be much more dirty in comparison to an AHU near the ocean.

We want to remove all this dust from the air before it enters and is distributed around the building because the people and equipment inside will be breathing this in.

Additionally we need to catch this dust before it gets deep into the AHU or duct work as this will stick to the fans, the motors, sensors and coils. It’s going to build up along the inside of the duct work as well. The more dust accumulates inside the duct work, the harder the fans need work to get over that pressure drop from the resistance that it causes. If too much dust built up on the motor or some of the mechanical parts, it could even potentially cause a fire.

Often the primary panel filters are used to protect the more expensive secondary filters expensive filters. The cheaper primary filters are placed in front to try and reduce the amount of dirt and dust caught by the expensive ones and that lets them last longer.

On the side of the primary filters, you should find some details about who the manufacturer is, an order number, the dimension and there should also be an arrow indicating the direction of airflow.

The secondary filters are there to catch pollen, bacteria and also some other dust which wasn’t caught initially by the primary filters. These are typically a bag filter type made from a synthetic material.

As you can see from the image above, the secondary filters extend backwards a short distance in the direction of air flow. They will inflate a little as air passes through them and that gives them a very large surface area. That allows the bag to capture more air at any given time as well as letting the filter last a while longer.

Above you can see an example of both a clean and dirty secondary bag filter for an AHU. You can see the clean version has some very soft, flexible material which a texture similar to cotton wool, this allows it to grip onto a lot of particles.

As you can see from the dirty version, this one has caught lots of dirt and pollen from the air. This one would be disposed of and replaced. In this example the dirt would have taken somewhere between three to six months to accumulate to this level, in this particular office building and local environment.

As the filters capture dirt, it’s harder for the air to move through due to the resistance to flow. This means the fan has to overcome the pressure which can be very energy intensive.

Across the filters we should find some pressure sensors. Usually a digital version connected to the BMS but also a physical manometer type to allow engineers to quickly read the gauge.

There are too measurement points for the pressure sensors, the high and low side. The high side reads the pressure at the front face side of the bag filters. The incoming air will come into contact with the face of the filter and then flow through the filter. This will create a high pressure side as it collides. On the back side we have another filter which is reading the pressure of the air as it leaves the filter. The air has lost pressure due to the filter so this is the low pressure side.

The two pressure readings will be different and we look at the difference to tell if the filter needs changing. In the example above, we see the dial reads around 145 pascals. In this case the manufacturer warns that around 200 – 250 pascals, the bags will need to be replaced, so these filters are a little dirty but still good. You should speak to your manufacturer to find out what the pressure difference should be across the filters in your AHU, as they do vary.

Filters do vary in energy efficiency, set by different standards. The higher efficiency ones will create a lower pressure drop, and that means that your fans can overcome that pressure a lot easier. The fans driving the air in the system are typically going to be around five to 10 kilowatts, so, as they’ll be running maybe 12 to 24 hours a day, there’s potentially a lot of energy you can save just from switching to a more energy efficient filter.

Area of an annulus