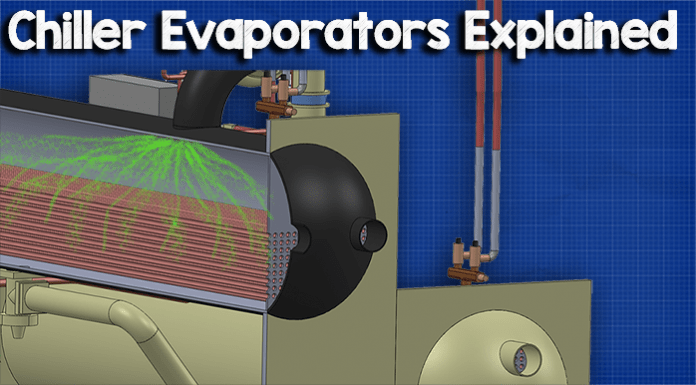 Chiller Evaporators. In this article, we’re going to be looking at the evaporator of a chiller. The evaporator is located just after the expansion valve and just before the suction line which goes into the compressor. The evaporator collects all the unwanted heat from the building. This is where the chilled water is produced. It collects the heat, removes it and send the water back out around the building to collect more heat.

Chilled water leaves the evaporator and is pumped around the building, this goes into the AHUs and collects all the unwanted heat from the building. The heat will transfer into the cold water because a fan within the AHU forces the warm room air across a heat exchanger containing the chilled water. The Air cools down and the water heats up. The warmed “chilled water” water flows back to the chiller evaporator where that heat is again transferred from the water and into the refrigerant within the chiller.

The chillers evaporator is usually insulated. If it’s not then it should be. In the above image you can see the evaporator as it’s covered with a black. This foam is the insulation.

Insulation is very important on the evaporator because all the chilled water is produced in the evaporator. That chilled water is very expensive to produce so we want to make sure that all the cooling energy produced gets sent out around the building to collect all the unwanted heat. We don’t want to be wasting it by picking up heat from the plant room where the chiller is located. We can, in most cases, just use fresh ambient air to cool this room.

Typically the insulation on the evaporator is going to be a vinyl nitrate polymer type insulation. It will be around 19 milometers thick, 3/4 of an inch, something like this. If you speak to the manufacturer of your chiller, they will almost certainly be able to provide you with a pre-made cover. All new chillers should come with this as standard.

The evaporator is a shell and tube design. The tubes sit inside the shell and contains the chilled water. The shell holds the refrigerant. The refrigerant and water never meet or mix, they are always separated by the metal wall of the tube and only the heat transfers between these.

The tubes run along the length of the evaporator and the chilled water flows inside the tubes. The refrigerant sits outside the tubes and is in contact with the tubes surface.

The refrigerant enters through the bottom at a liquid from the expansion valve. The refrigerant has an extremely low boiling point and the heat of the incoming (warm) chilled water is around 12 ° C which will cause the refrigerant to boil off into a vapour.

Learn about refrigerants and how they work here

As the refrigerant boils off, it carry’s away the unwanted heat from the incoming chilled water. Imagine when you are hot you sweat, this liquid coats the surface of your skin and as it evaporates it will take the heat away and cool you down. Same if you boil some water in a pan, the steam coming off is hot, it’s carrying heat away.

The chilled water enters the evaporator, having collected the unwanted heat of the building, at around 12 ° C (53.6 ° F) flows through the evaporator giving up it’s heat and then leaves cooler at around 6 ° C (42.8 ° F).

To hold the refrigerant inside the evaporator shell and ensure it doesn’t leak, a metal plate is welded to each end. The plate is drilled to allow the chilled water tubes to pass through. The tubes are not welded to the plate though, usually anyway, a toll is inserted and expands the pipe diameter to create a perfect seal between the tube, which is usually a copper material, and the carbon steel end plate.

At either end of the evaporator we install some dome shaped metal plates known as water boxes. You can see the the example above, there are two holes separated by a metal plate. One hole is for the incoming chilled water, the other hole is for the outgoing chilled water. The metal plate between the two is known as a baffle, it’s only purpose is to keep the supply and return flow rates separated. Although some heat will transfer between the two.

Alternatively, you may have a plate like this on one end, which does not have the baffle in between. This simply channels the water so it will hit this, turn 180 degrees and flow back into some more tubes and then out the same side it came in. This makes the chiller more efficient and more compact.

Alternatively, you could have a two-pass evaporator. That’s where the chilled water enters the first water box, it then passes through the tubes, into the end water box, which does not have a baffle, it does a 180 turn and continues out through the first water box again. You can tell if a chiller is a two pass because the entrance and exit will be on the same side.

On the side of the evaporator you will find the manufacturers stamp with the name and also the model number. You can contact the manufacturer, or check their website, for technical details.

The shell, water boxes and the end plates are usually made from carbon steel. They’ll be built to a certain standard, depending on what country you’re in, to withhold a certain amount of pressure. They generally take a giant sheet of carbon steel and roll this to form a pipe shape and then weld along the seam to form the shell.

The tubes, on the other hand, are generally made from a copper ally. Sometimes they’re made from stainless steel, that all depends on what the water is on the other side and whether it will corrode the material. Copper is generally used for commercial office buildings.

Looking inside the evaporator and you can see the refrigerant as well as the tubes. Notice that these tubes are not smooth, they have these ridges all the way along them. That’s important because these fins increase the surface area of the tube. That means more heat can transfer out of the chilled water and into the refrigerant. This means that the chiller is more efficient and smaller.

Hours between two dates and times

Area of a rectangle