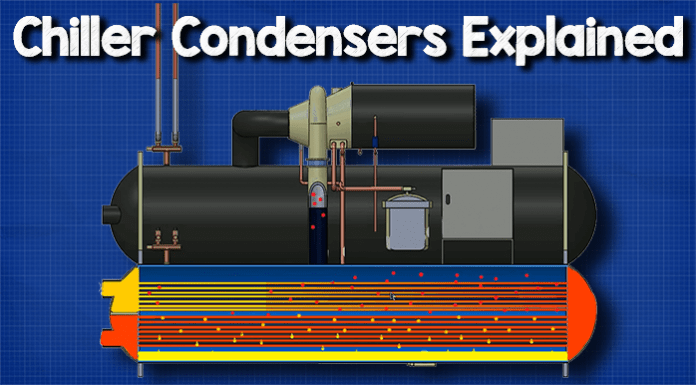 The condenser usually isn’t insulated. The heat within the condenser is unwanted and is just going to be rejected out to atmosphere. So if it looses some heat in the plant room, it doesn’t really matter in most instances. However, if the plant room is being cooled by refrigeration as well, then it makes perfect sense to insulate this and reject all the heat out into the building, but if the plant room is just being cooled by outside ambient air, then it doesn’t matter.

What does the condenser do?

Under the shell of the condenser we have multiple tubes inside. These run from one end to the other. Depending on the design the condenser water will either flow straight through all the tubes or it will flow in through half of them and then do a U turn and come back out the same end. This is to increase efficiency and reduce the size.

The tubes contain the condenser water. On the outside of the tubes is the refrigerant which is coming from the compressor. The two fluids are always separated by the tube wall. They’re completely isolated from each other.

There’s a baffle between the inlet and outlet on the first water box. This is just there to separate and divert the flow into the correct tubes.

Hot compressed refrigerant is going to come out of the compressor and start to fill this void within the condenser. The hot refrigerant vapour will fill the space between the tubes containing the condenser water.

As the hot refrigerant comes into contact with the cooler surface of the condenser tubes, the refrigerant is going to condense into a liquid on the tubes surface. As it does so the heat will transfer through the tube wall and into the refrigerant.

If the refrigerant is the same temperature as this return condenser water then the chiller will not be able to reject any heat that’s been picked up in the building, and so the building will be unable to cool down.

Equally if the cooling tower is unable to reject the heat that’s being sent up to it, then it’s going to return at the same temperature. E.g. if it’s going up at 32 degrees Celsius, and the cooling tower is unable to reject this heat, (perhaps there is recirculation happening or the water is just dumping instead of spraying, or there’s a problem with the baffles) and the water is just returning straight back down into the condenser, then you will not be able to reject any heat from the compressor and it will eventually cause the chiller to trip on high pressure.

Above you can see two thermal images of a chiller. The left image in the discharge line coming out of the compressor, the centrifugal compressor is on the top and the hot compressed refrigerant is exiting via the discharge line, into the condenser. You can see that it’s going to be around 55 degrees celsius.

You should have noticed that these figures are a slightly different temperature range than in the schematic which we were looking at earlier. That’s just because the schematic is showing design figures at a high loading, whereas this is actual figures from a lower loading. There will always be a difference between design and actual. That depends on the cooling load on the chiller and the outside ambient temperature.

Now, with this type of cooling tower where the condenser water enters in and then is sprayed through the cooling tower to get rid of that heat to reject and dissipate it into the atmosphere this is an open system whereas this loop here is a closed system this loop here is an open system so the water is sprayed and air and dirt etc. can get into this system. And what comes into this system gets sent down into the condenser.

There are two types of cooling towers used, open circuit and closed circuits. Open circuits are the most common, they spray the hot condenser water into the ambient air which effectivly cools the water down using the latent heat of evaporation.

This presents a problem though, because we get an effect known as fouling occurring on the inside of the condenser water pipework and the condenser heat exchanger.

Dirt and other particles will collect on the surfaces of the pipes and heat exchanger and will form a layer of insulation.

This build-up is basically small deposits of salt, scale, dirt, mineral build-up and also bacterial growth. As I said it insulates the pipe which reduces the chillers efficiency and cooling capacity. This can be treated with a rigorous chemical dosing regime. Unfortunately this by itself will not be enough to stop it, it will just be enough to reduce it or mitigate it. Alternatively, you can get some specialists to come in and clean it off.

Properties of water at atmospheric pressure