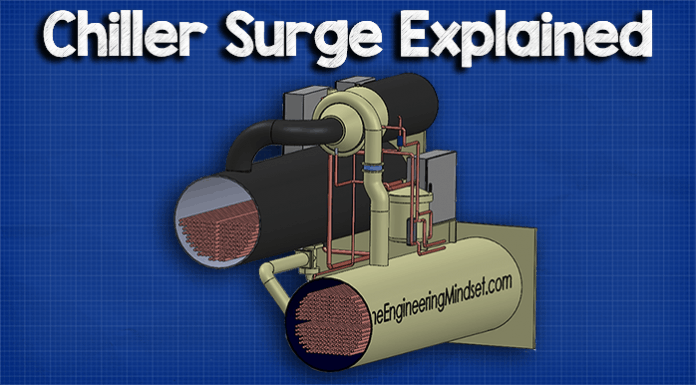 Chiller Surge. In this article we are going to be looking at chiller surge. We’ll look at the causes and diagnostics of chiller surge and understand what’s happening internally to cause chiller surge.

In normal operation, the refrigerant will exit the compressor through the discharge line and flow into the condenser. From there it passes through the expansion valve and into the evaporator where it will be pull into the compressor again via the suction line. The cycle repeats constantly to allow the chiller to dump the unwanted heat from the evaporator, which was collected from the building, and move this over to the condenser so it can be sent off to the cooling towers.

The compressor is the driving force of the refrigerant between the evaporator and the condenser. The compressor is driven by an electric motor. As it rotates, the internal impeller rotates and will suck refrigerant in from the evaporator via the suction line. The blades on the impeller imparts and angular velocity onto the refrigerant particles causing them to fly off the end of the blades in all directions at very high velocity.

As the refrigerant flies off the impeller blades it collects into the volute which is a channel surrounding the compressor in a spiral shape which enlarges in diameter along it’s length. It then passes through the diffuser, where it slows down and converts its kinetic energy into pressure. This pressure builds up in the volute and forces the refrigerant out, through the discharge line into the condenser.

In the section view above, you can see the flow path from the evaporator through the suction line into the compressor, which is rotating and pushing the refrigerant out through the discharge line and into the condenser. It flows this way because the compressor causes a pressure difference across the impeller.

Now, each compressor can only provide a certain amount of pressure difference. Each compressor is different and you’ll have to speak to the chiller’s manufacturer to find out what the rating of a compressor is.

That pressure difference caused by the compressor is known as chiller lift. That’s where it is taking the refrigerant at low pressure and increasing (lifting it) it through use of the compressor and forcing it into the condenser as a higher pressure.

Let’s say that this chiller is working at it’s maximum rating. It’s maximum lift is from 300 kPa to 900 kPa. (3 Bar to 9 Bar). That means it will take refrigerant in from the evaporator at a pressure of 300 kPa (3 Bar) and it will compress it and force it into the condenser to it’s maximum which is 900 kPa (8 Bar).

It is important to note that these numbers are just for example purposes. As mentioned, please do check with your chiller manufacturer to find out what your surge line is and what your chiller lift is.

When chiller surge occurs, the pressure in the condenser has become too great and the refrigerant starts to push back. This causes it to start flowing in the opposite direction, backwards, through the discharge line and into the compressor.

The compressor will still continue to rotate because it’s job is to push refrigerant into the discharge line and into the condenser. As the pressure is already too great the refrigerant will flow back through into the impeller blades and out through the suction line into the evaporator.

This is not a good scenario for the chiller. It can cause some really serious damage to the chiller. You’ll know when this occurs because the chiller’s going to make a really loud, groaning, kind of squealing noise. That noise will be coming from the compressor. You’ll probably also experience some quite large swings in the amount of amps being drawn by the compressor also.

If you listen to the video, you can hear an example of a chiller surging.

Additionally, the pump strainer might become blocked and that will reduce the flow of water through the system.

The distribution tray at the top of the cooling tower may also become blocked with scale and debris etc. The tubes inside the condenser may become covered in scale and this would reduce the amount of heat transfer that can occur because it is going to change the heat transfer surface area, that’s known as fouling.

Surge will also usually occur when the chiller is run at part load, e.g. the chiller is operating it lower than it’s maximum design. Once this load drops to a certain point, this will cause surge because the temperatures will not be sustainable to function the machine.

Some ways to get around this though are by fitting a variable speed drive, or variable frequency drive, onto the induction motor which drives the compressor. This will change the rotational speed of the compressor to modulate its capacity.

Some chillers may have a hot gas bypass built in, and this is used to allow the capacity to be reduced, while maintaining a sufficient gas flow through the compressor.

Some manufacturers will also fit variable diffusers into the compressors. This reduces the gap in the diffuser for which the refrigerant can flow into the volute, maintaining the gas velocity.

Volume of a Cube