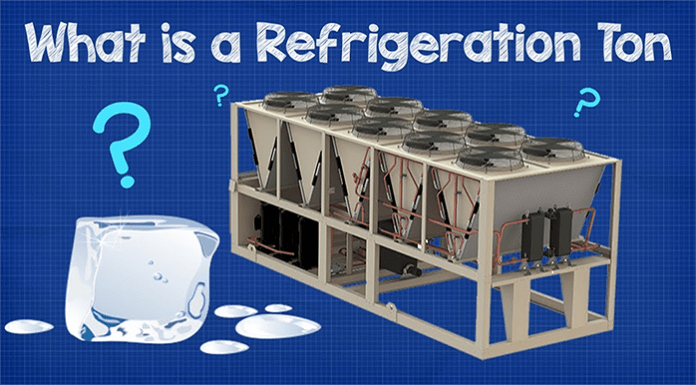 The term refrigeration ton is commonly used, and mostly used, in North America. It’s a unit of measurement for the cooling capacity of a refrigeration machine. It has a few variants, and it’s sometimes called a ton of refrigeration or just RT for short.

The term refrigeration ton is a little bit confusing to many people. It has nothing to do with the weight of the machine. It only relates to the amount of cooling that the machine can produce.

The term used to be used in many other countries, but the majority of the world has switched over to SI metric units of kilowatts of cooling. However, some people and manufacturers will still refer to equipment rated in refrigeration tons.

If you’d like to learn how chillers work, air conditioning units or heat pumps, then follow the links.

The term refrigeration ton came about in the late 1800’s. This is when blocks of ice were used in air handling units to provide cooling. They would literally order blocks of ice by the ton. This would then sit directly in the flow of the warmer supply air, which melted it and carried the cold air away into the building. So a ton of ice would provide a ton of cooling, and the equivalent amount of cooling later became available through vapor compression refrigeration machines.

This is only the energy to cause a phase change of the water to turn it from a liquid into a solid. (From water into ice). If the water was at room temperature, then you would need to remove more heat to bring it down to zero degrees Celsius, 32 degrees Fahrenheit, before it can be turned into ice.

Let’s look at some calculations for this in the modern units for both metric and imperial. So a short ton is equal to 907.18 kilograms or 2,000 pounds. The latent heat of fusion for ice is 334 kilo joules per kilogram or 144 BTU’s per pound. So to calculate the latent heat cooling load, just multiply the respective units together.

In the image above you can see example calculations for how to convert between different, common, refrigeration units.

Battery Life Calculator- How long will it power a circuit?