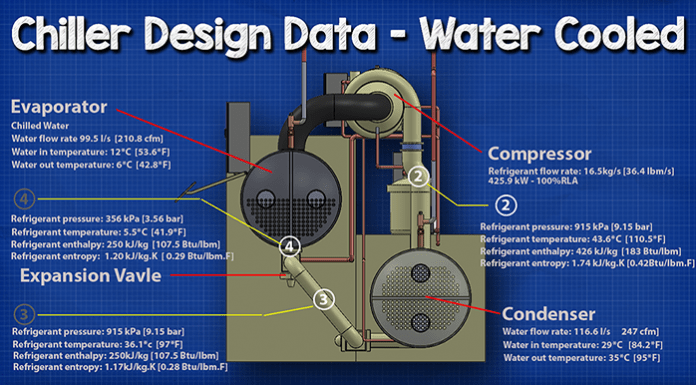 Water cooled chiller design data. In this article we are going to be taking a very detailed look at the design data for a centrifugal, water cooled, chiller. This is a pretty advanced chiller video, so if you’re new to the topic then I highly recommend you start from the basics first.

Scroll to the bottom to watch the YouTube tutorial video on chiller design data.

I want to stress that this is simply design data. Every chiller is different and you should speak to your manufacturer for the relevant information. The results will vary from the real world and also with loading.

In the illustration above we have shown the main chiller components. The compressor, which is the driving force of the refrigerant around the system. The condenser which removes the unwanted heat from the system and send this to the cooling tower. The expansion valve which expands the refrigerant and controls the superheat into the compressor and the evaporator which collects the unwanted heat coming from the building and generates the chilled water.

We’re going to be looking at all the points on these two charts to see the pressure, temperature, enthalpy and entropy are around this system. The left chart is our Temperature v’s Entropy chart and the right chart is our Pressure v’s Enthalpy chart.

In this example the compressor is pushing a refrigerant with a flow rate of 16.5 kg/s (36.4 lbm/s). That motor is then consuming 425.9 kilowatts and the compressor is running 100% load. If the chiller runs at part load then the values will be different.

The compressor is compacting the refrigerant into a smaller space, and looking at our charts we know that the enthalpy is going to increase, the entropy is going to slightly increase and the pressure and temperature will massively increase.

Now the reason the flow rate is higher in the condenser compares to the evaporator is because the condenser has to reject more heat. It also has to take the heat away from the compressor and other parts of the machine.

Once the refrigerant has give away some of its energy to the circulating condenser water, it will now leave as a liquid at 36.1 ° C (97 ° F) but still at the same pressure as it entered. It’s entropy will have dropped to 1.17 kJ.kg.K (0.28 BTU/lbm.F) and the enthalpy increases to 250 kJ/kg.K (107.5 BTU/lbm). It then enters into the expansion valve.

The refrigerant is expanded through a small orifice which sprays the refrigerant. It expands into a larger volume and decreases in pressure as a result, which allows it to drop in temperature as it’s now not packed so tightly. It will leave at a temperature of 5.5 ° C (41.9 ° F), a pressure of 356 kPa (3.56 Bar) and from the charts we know it will maintain the same enthalpy but the entropy will change slightly and it leaves at 1.20 kJ/kg.K (0.29 BTU/lbm.F).

The refrigerant is picking up thermal energy but the temperature only changes slightly which confuses many people. The reason it doesn’t increase dramatically is because it is undergoing a phase change from a liquid to a vapour so the thermal energy is being used to break the bonds between the molecules. The enthalpy and entropy will increase and this is where the energy is going

The refrigerant then returns to the compressor to start the cycle all over again.

How a Car Battery Works