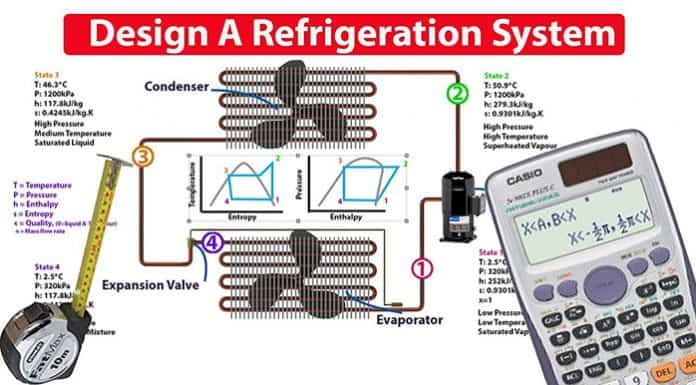 Scroll to the bottom to watch the YouTube tutorial video on refrigeration design and analysis.

Here we have our basic refrigeration cycle. The main components are, the compressor, the condenser, the expansion valve, and also the evaporator.

To design and analyse a refrigeration system, we want to know what the thermodynamic properties will be for the refrigerant at our four key components.

For each of these points, we need to know the refrigerants temperature, entropy, pressure, and enthalpy.

We’re going to plot our system onto two charts to do this. Notice the grey line which forms a dome on both. Anything to the left of this is where the refrigerant is a liquid. Any point under the dome, the refrigerant is part vapor, part liquid mixture. Anything to the right hand side of the line is where it’s going to be a super heated vapor. If the point touches the line on the left, then it’s saturated liquid. If it touches the line on the right then it’s going to be a saturated vapor.

We can also see that point 4, just after the expansion valve, when the refrigerant has been expanded, the refrigerant will be a much lower pressure and temperature. So it’s a low pressure, low temperature, and it’s in between the dome. So it’s going to be a liquid vapor mixture.

Now there’s lots of ways that you can start to design one of these systems. Probably knowing the cooling load that you want to achieve would be a very good point to start with.

We’re going to start with the compressor. Let’s say I have a compressor that’s able to push seven kilograms a second of refrigerant around the system.

From the compressors manufacturers data, we can find that it’s able to produce a 1,200 KPA of pressure and it also needs a suction pressure of 320 KPA. So we start by using these values.

We will input this data into a chart.

So, we know that the suction pressure is 320 KPA and that it is a saturated vapor on the saturation line (Point 1). We just need to look up what the values of these are going to be on the thermodynamic properties of refrigerant. For this example we’ll just use R134a.

You can obtain the properties for Refrigerant R-134a by clicking here Then scroll down to the saturated vapour refrigerant tables. So we want to find 320 KPA.

Take a note of the values highlighted above. These at the saturated vapour conditions when the refrigerant is at 320 kPa for temperature, volume, enthalpy and entropy. These are all values for Point 1.

Now we’ll have a look to find what the properties of the refrigerant are at state 2.

Now, go back to the refrigerant tables, we need to know two points of reference this time to find the values. At the moment we just know what the pressure is (1,200 kPa)and we know it’s a super heated vapor. Because we are doing this as an ideal cycle, we can assume the compressor is isotropic and that means the entropy at point 2 equals that at point 1. (0.9301 kJ/kg.K)

We therefore input copy the entropy value from point 1 to point 2. Now we have two data points so we can look in the super heated vapor tables to find the enthalpy and temperature.

Now, the entropy we’re looking for is 0.9301 kJ/kg.K. But looking down this list, we can’t find it, it’s between two values. So to find it, we just have to use some linear interpolation.

Watch the YouTube tutorial to see how to calculate this in excel.

As this is an ideal system, there is no resistance to flow, so there’ll be no pressure drop. In the real world obviously there will be a little pressure drop, but as this is ideal then we can assume that the pressure at point 3 is the same as point 2.

That’s all our properties for Point 3.

Now we need to know what the properties of the refrigerant are going to be at point 4. This is slightly more tricky because it’s in the vapor dome. So it’s part liquid, part vapor. We’re not sure exactly yet how much vapor or liquid it is. But that’s okay because we can just work it out.

We know the temperature is going to be the same as point 1 and that the enthalpy will remain constant through the expansion valve. (Look at the charts to see that). So, that means we can use the enthalpy from state 3. Therefore we can drop these figures in for point 4.

We also know what the pressure is because that is going to be equal to state 1 and that means we only need to find out what the entropy is. The way we do that, is by finding the quality of the refrigerant. So what part liquid or vapor do we have.

For that we come back to the saturated refrigerant tables. We scroll down until we find the 320 kPa line. Then we want to copy the entropy, enthalpy, temperature, and pressure for both the saturated liquid and vapors. Paste these into excel it’ll be easier.

When we drop the numbers into the formula, you’ll see that this comes out as a decimal, because it’s a ratio, which is roughly 32%.

We now use that value to work out what the entropy is going to be at state 4, and we do that using the formula below.

So that’s all the properties of the refrigerant worked out.

Work done by the compressor

Let’s work out the amount of work done by the compressor. We can do that using this formula below.

For that, we use the enthalpy of state 2 and state 1 and the mass flow rate of the refrigerant. From the formula we can see that the compressor’s doing 82.29 kilowatts of work on the system.

We can also work out the cooling load on the evaporator by using the formula below.

We can also calculate the heat rejection by the condenser and we can see that from the formula below.

Again, a very simple and similar formula. We can see the condenser is rejectiong 485 kilowatts.

Notice that is higher than the cooling provided and that’s because we have to get rid of the heat produced by the compressor as well. So you can add these together to check if your fingers are correct.

If they don’t equal, then you’ve done something wrong and you need to go back and just have a look through some of your figures.

We can calculate the efficiency of the system, or the coefficient of performance, using this formula below.

This formula is very simply, it’s just a ratio of work out by work in. This example our system has a coefficient of performance of 4.89. Meaning for every kilowatt of electricity you put in, you’ll get 4.89 kilowatts of cooling out, which is very efficient.

Here are all our properties for the system.

If you want to calculate the temperature of the air coming off the evaporator then you can follow this tutorial here.

Volume of a cone