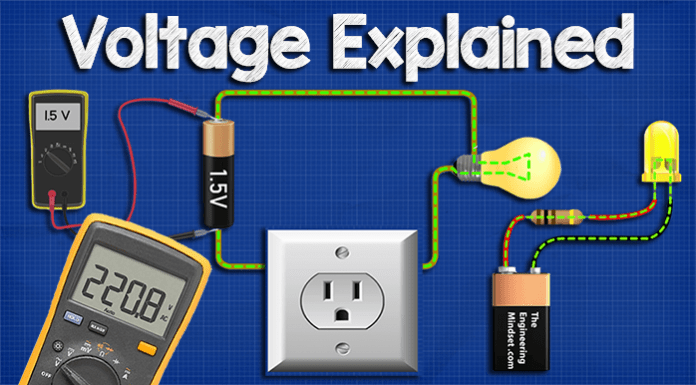 Electrical voltage basics. In this video we’re going to be discussing voltage, we’ll learn what is voltage and potential difference, how to measure voltage, the difference between direct and alternating voltage and current as well at why voltages vary around the world.

It’s easy to imagine voltage like pressure in a water pipe. If we have a vessel completely filled with water, then the mass of all that water is going to cause a huge amount of pressure at the end of the pipe.

If we have a water tank that’s only partly filled then there will be much less pressure in the pipe.

If we open the valve to let the water flow then more water will flow at a faster rate from the high pressure tank, compared to the low pressure tank. The same with electricity, the more voltage we have the more current can flow.

Voltage can exist without current. For example we can measure the pressure in a water pipe with the valve shut, with no water flowing, and from this we see that it is pressurised. What we’re really measuring in the pressure difference between what’s inside the pipe compared to the pressure outside.

Same if we have a battery connected to a circuit with an open switch. The voltage is still present, we can measure that and as soon as that swtich closes it’s going to push the free electrons around the circuit.

We sometimes hear voltage referred to as potential difference. This really means how much work can potentially be done in a circuit.

Coming back to our water analogy, if we have two lakes at the same level then there is no potential to do work because the water isn’t flowing.

But if we raise one lake higher than the other, then this higher lake now has the potential to flow down to the second one. If we give it a path, it will flow. If we place a turbine in it’s path then we can use it’s energy to power a light, or an entire town.

Back to the electrical circuit, the battery has a potential difference of 1.5V between it’s negative and positive terminal.

If we connect a piece of wire to both terminals of a battery then the pressure of the battery will force the electrons to flow in the same direction along the same path. We can then place electrical components in the path of these electrons to do work for us, for example we place a lamp into the circuit then it will light up as the electrons flow through it.

If we then added another battery to the circuit in series, then the electrons will be effectively boosted by the second battery because they can only flow along this path and there is more energy being added. This will combine the voltages and so we get 3 Volts. More volts = more pressure which means more pushing force so more electrons will flow and the lamp will glow brighter.

However, if we were to move the battery and connect it in parallel, then the path of the electrons splits, some will flow the first battery and some will flow to the second battery, therefore the batteries will both provide the same amount of energy so the voltage isn’t combined and isn’t boosted. We only get 1.5 Volts. The work load is split by the batteries and the lamp will be powered for longer, but it will be dimmer.

We measure the potential difference or voltage with the unit of Volts and we use the symbol of capital V to show this. If you look on your electrical appliances you will see a number next to a V, indicating how many volts the product is designed for.

In this example the manufacturers of this usb hard drive are telling us the device needs to be connected to a 5V DC or direct current supply, and it needs 1 Amp of current for the device to work.

The term volt comes from an Italian Physicist called Alessandro Volta who invented the Voltaic Pile which was the first electrical battery that could provide an electrical current at a steady rate in a circuit.

Voltage and Volts are different. Remember Voltage is the pressure and Volts is just the units we measure it in. Same as we know the pipe has pressure but we use units to measure this pressure such as Bar, PSI, kPa etc.

As we saw earlier, we can measure volts with a voltmeter, this can be separate or part of a multimeter. If you don’t have a multi meter yet, I highly recommend you get one. This is the multimeter I would suggest but there are other options available to suit your needs and budget.

To measure Voltage, we have to connect to the circuit in parallel across two points we would like to know the voltage or potential difference for.

So we saw earlier that voltage and volts are different, voltage is pressure and volts is the unit of measurement, so what does one Volt mean?

One Volt is required to drive one coulomb or approximately six quintillion, two hundred and forty-two quadrillion 6.242×10^18 electrons through a resistance of one ohm in one second.

Another way to explain it, to power the 1.5W lamp with a 1.5V battery would require 1 coulomb or six quintillion, two hundred and forty-two quadrillion 6.242×10^18 electrons to flow from the battery and through the lamp every second for it to stay on.

To power a 0.3W lamp with a 1.5V battery, would require 0.2 coulombs or approximately one quintillion, eight hundred and seventy-two quadrillion, six hundred trillion 1.8726×10^18 electrons to flow from the battery and through the lamp every second for it to stay on.

If we tried to use a lower voltage, the lamp would turn on but it decreases in brightness as the voltage decreases, because there is less pressure to force the electrons through it. Less electrons flowing, less light the lamp can produce.

Batteries are sources of Direct Voltage meaning the pressure it provides moves the electrons in a constant current in one direction, like the flow of water down a river.

Direct voltage is usually represented with a capital V with some dots above it and a small horizontal line. If we plotted this voltage against time, it would produce a straight line.

The voltage in our wall sockets is alternating voltage, this is a different type of electricity, in this type the electrons alternate between flowing forwards and backwards because the polarity of the circuit is changing like the tide of the sea, if we plotted this voltage against time, we get a sine wave as it moves forward and rises to its maximum and then starts to decline, it passes through the zero and then the current is flowing backwards but it hits its minimum and then reverses direction again.

This is usually represented with a capital V with a wave line above it.

The voltage at wall sockets varies depending on where in the world we are. The majority of the world uses 220-240V but North, central and some of south America as well as a few other countries scattered across the planet will use 100-127V.

We can measure the voltage at our sockets and see that it actually changes slightly throughout the day, by using a cheap energy meter. Click here to see that.

The reason for the different voltages around the world goes all the way back to the beginning when electricity first started being distributed, there was no standardisation so each distribution network had it’s own voltage and frequency for whatever their engineers felt was best. Eventually over time some companies grew and dominated the market and so voltage and frequency standardised as their products and services expanded, governments also stepped in and passed laws so that people could buy products easily and also trade products with other countries.

This is still a problem to this day, for example if we take a hair drier from the US, rated at 110V and plug it into a wall socket in Europe which has 220V. The hair drier will burn out at full power because there is too much voltage or too much pressure and the device can’t cope.

If we took a hair drier from Europe and plugged it into a US socket, it probably won’t turn on and if it does it’s going to be very weak because there isn’t enough pressure for it to function.