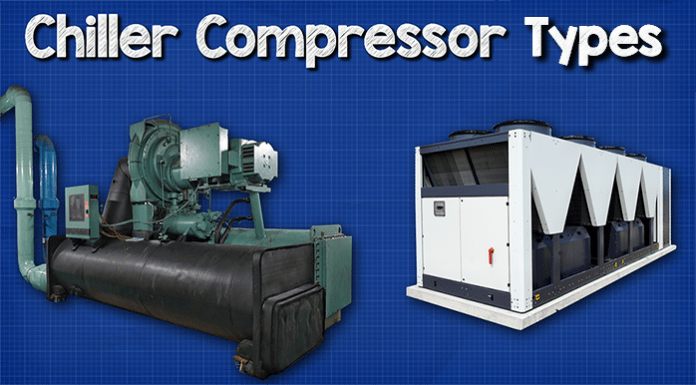 We’re going to have a look at the real world examples of how these look in the plant rooms, so that you can spot these when you’re walking around and we’ll also have a brief look at how each one works.

The refrigerant flows in through the suction line, hits into the the centre of the impeller where it will be directed by the blades. The blades rotate and that imparts an angular velocity onto the particles of the refrigerant. This angular velocity makes the refrigerant particles fly out at high velocity, in all directions, and collects in the volute (the outer curl) where it increases in pressure from the kinetic energy, it then passes down into the condenser. This type of compressor/chiller is a very common set up for a central plant in large buildings.

A variation of the centrifugal type is the Turbocor compressor. Turbocor compressors are much smaller units mounted also to the top of the chillers. These work very similar to the centrifugal type, but they have two stage compressors inside. The refrigerant flows in through the front, passes through the two different compressors and then the refrigerant exits and travels down into the condenser. These usually have magnetic bearings and electronic motors inside, which make these units very efficient. Turbocor are becoming much more common and they are set to continue this trend.

The scroll compressor is used mostly on air cooled chillers but you can also find them on water cooled. Usually one compressor isn’t enough to meet the cooling load so several will be joined together in a bank. In the example above the blue cylinders under the chiller are the compressors which are joined to form a bank.

With these type of compressors, the refrigerant usually enters via the bottom and is fed into the compressor discs. One disc will be stationary whilst the other is rotated to compress the refrigerant into a tighter space. The refrigerant is forced around the spiral as the disc moves which causes it to compress, it will then leave via the top and head to the expansion valve.

The last one we’re going to look at is the reciprocating type compressor. These type are becoming less common because newer, more efficient, technology has been replacing it so these are slowly being phased out in commercial refrigeration at least. It’s still quite popular in industrial refrigeration. These are very strong and reliable compressors which seem to just work forever with the right maintenance. There are a lot of moving parts though so they can be expensive to operate.

Filter Driers How do they work