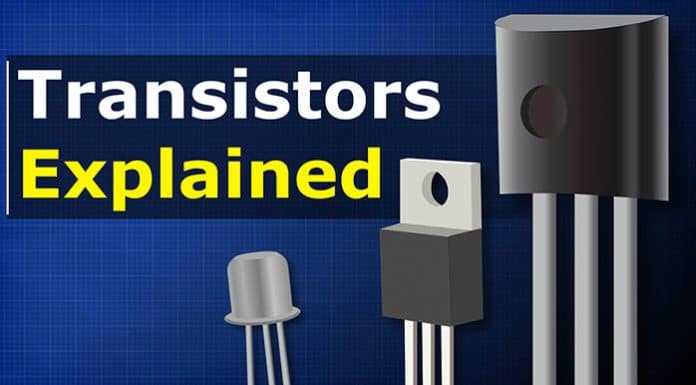 Learn about transistors- one of the most important devices ever to be invented. We’re going to learn how they work in detail in this article.

What is a Transistor

Transistors come in many shapes and sizes. There are two mains types, the bipolar and field effect. We’re going to mostly focus on the bipolar version in this article. Transistors are small electronic components with two main functions. It can act as a switch to control circuits, and they can also amplify signals.

Small, low power transistors are enclosed in a resin case to help protect the internal parts. But higher power transistors will have a partly metal case which is used to help remove the heat generated, as this will damage the components over time. We usually find these metal body transistors attached to a heat sink which helps remove the unwanted heat.

For example, inside this DC bench power supply, we have some mosfet transistors which are attached to large heat sinks. Without the heatsink the components quickly reach 45 degrees Celsius (or 113°F) with a current of just 1.2 Amps. They will become much hotter as the current increases. But for electronic circuits with small currents, we can just use the resin body transistors which do not require a heat sink.

On the body of the transistor, we find some text, this will tell us the part number which we can use to find the manufacturers datasheet. Each transistor is rated to handle a certain voltage and current, so it’s important to check these sheets.

Why Do We Use Transistors?

We know that if we connect a light bulb to a battery, it will illuminate. We can install a switch into the circuit and control the light by interrupting the power supply. But, this requires a human to manually control the switch. So, how can we automate this? For that we use a transistor. This transistor is blocking the flow of current, so the light is off. But, if we provide a small voltage to the base pin in the middle, it causes the transistor to start allowing current to flow in the main circuit, so the light turns on. We can then place a switch on the controlling pin to operate it remotely, or we can place a sensor on this to automate the control.

Typically, we need to apply at least 0.6 – 0.7 volts to the base pin for the transistor to turn on. For example, this simple transistor circuit has a red LED with a 9 volt power supply across the main circuit. The base pin is connected to the DC bench power supply. The circuit diagram looks like this.

Typically, there is a very small current in the base pin, perhaps just 1 milliamps, or even less. The collector has a much higher current for example 100 milliamps. The ratio between these two in known as the current gain and uses the symbol beta (β). We can find the ratio in the manufacture’s datasheet.

In this example the collector current is 100 milliamps and the base current is 1milliamps so the ratio is 100 divided by 1 which gives us 100. We can rearrange this formula to find the currents also.

We have two main types of bipolar transistors, the NPN and the PNP type. The two transistors look nearly identical so we need to check the part number to tell which is which.

Transistors are shown on electrical drawings with symbols like these. The arrow is placed on the emitter lead. The arrow points in the direction of conventional current so that we know how to connect them into our circuits.

How Does a Transistor Work

To understand how a transistor works, we want you to first imagine water flowing through a pipe. It flows freely through the pipe, until we block it with a disc. Now, if we connect a smaller pipe into the main one and place a swing gate within this small pipe- We can move the disc using a pulley. The further the swing gate opens; the more water is allowed to flow in the main pipe. The swing gate is a little heavy, so a small amount of water won’t be enough to open it. A certain amount of water is required to force the gate to open. The more water we have flowing in this small pipe, the further the valve opens and allows more and more water to flow in the main pipe. This is essentially how a NPN transistor works.

You might already know that when we design electronic circuits, we use conventional current. So in this NPN transistor circuit we assume that the current flows from the batteries positive, into both the collector and base pins and then out of the emitter pin. We always use this direction to design our circuits.

However, that’s not what’s actually occurring. In reality the electrons are flowing from the negative to the positive of a battery. This was proved by Joseph Thompson who carried out some experiments to discover the electron and also prove they flowed in the opposite direction. So, in reality, electrons flow from the negative into the emitter and then out of the collector and the base pins. We call this electron flow.

Remember, we always design circuits using the conventional current method. But, scientists and engineers know that electron flow is how it actually works.

By the way we have also covered how a battery works in detail in our previous article, do check that out HERE.

Ok, so we know that electricity is the flow of electrons through a wire. The copper wire is the conductor and the rubber is the insulator. Electrons can flow easily through the copper but they can’t flow through the rubber insulator.

If we look at the basic model of an atom for a metal conductor, we have the nucleus at the centre and this is surrounded by a number of orbital shells which hold the electrons. Each shell holds a maximum number of electrons, and an electron needs to have a certain amount of energy to be accepted into each shell. The electrons located furthest away from the nucleus hold the most energy. The outer most shell is known as the valance shell, a conductor has between 1 and 3 electrons in its valance shell. The electrons are held in place by the nucleus, but there is another shell known as the conduction band. If an electron can reach this, then it can break free from the atom and move to other atoms. With a metal atom such as copper, the valance shell and the conduction band overlap, so it’s very easy for the electrons to move.

With an insulator, the outer most shell is packed. There’s very little, to no room, for an electron to join. The nucleus has a tight grip on the electrons and the conduction band is far away, so the electrons can’t reach this to escape. Therefore, electricity cannot flow through this material.

However, there’s another material known as a semiconductor. Silicon is an example of a semiconductor. With this material, there’s one too many electrons in the valance shell for it to be a conductor, so it acts as an insulator. But, as the conduction band is quite close, if we provide some external energy, some electrons will gain enough energy to make the jump into the conduction band and become free. Therefore, this material can act as both an insulator and a conductor.

Pure silicon has almost no free electrons, so what engineers do is dope the silicon with a small amount of another material, which changes its electrical properties. We call this P-Type and N-type doping. We combine these materials to form the P-N junction. We can sandwich these together to form a NPN or PNP transistor.

Inside the transistor we have the collector pin and the emitter pin. Between these, in a NPN transistor, we have two layers of N type material and one layer of P type.  The base wire is connected to the P type layer. In a PNP transistor this is just configured the opposite way. The entire thing is enclosed in a resin to protect the internal materials.

With P-type doping, we add in a material such as aluminium, or alu-min-um, this atom has only 3 electrons in its valance shell. It therefore can’t provide it’s four neighbours with an electron to share, so one of them will have to go without. This means a hole has been created where an electron can sit and occupy.

We now have two doped pieces of silicon, one with too many electrons and one with not enough electrons. The two materials join to form a PN Junction, at this junction we get what’s known as a depletion region. In this region, some of the excess electrons from the n-type side will move over to occupy the hole in the p-type side. This migration will form a barrier with a build-up of electrons and holes, on opposite sides.

When we connect a voltage source across the two ends, with the positive connected to the P-type material, this will create a forward bias and the electrons will begin to flow. The voltage source has to be greater than the 0.7 volt barrier, otherwise the electrons can’t make the jump.

In a NPN transistor, we have two layers of N-type material, so we have two junctions and therefore two barriers. So, no current can flow through it ordinarily.

If we connected a battery across the base and the emitter, with the positive connected to the P-type layer, this will create a forward bias. The forward bias causes the barrier to collapse as long as the voltage is at least 0.7 volts. So, the barrier diminishes and the electrons rush across to fill the space within the P-type material. Some of these electrons will occupy a hole, and will be pulled towards the positive terminal of the battery. The P-type layer is thin and was lightly doped on purpose, so that there is a low chance of electrons falling into a hole. The rest will remain free to move around the material. Therefore, only a small current will flow out of the base pin leaving an excess of electrons now in the P-type material.