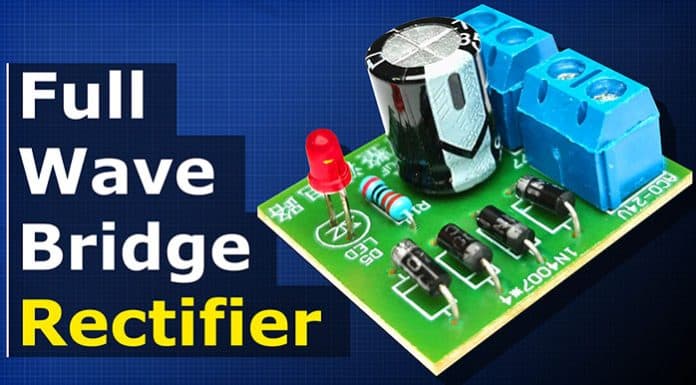 This is a full wave bridge rectifier. It’s used to power our electronic circuits, so we’re going to learn in detail how they work in this article.

Electricity is dangerous and can be fatal, you must be qualified and competent to carry out any electrical work.

What is a Full Bridge Rectifier

Full bridge rectifiers look like this, there are many shapes and sizes but they essentially consist of 4 diodes in a certain arrangement. They are usually aligned in a Dimond configuration, but they can also be aligned in other ways such as these.

We typically find them represented on engineering drawings like this.

The full bridge rectifier converts AC alternating current, into DC direct current. Why is that important? Because the power outlets in our homes provide AC but our electronic devices use DC, so we need to convert the AC into DC electricity.

For example, a laptop charger takes AC from the power outlet and convers this to DC to power the laptop. If you look at the power adapter for your laptop and electronic devices, the manufacturers label tells you it’s converting AC to DC. In this example it states it needs an input of between 100 and 240V, with the symbol for AC electricity, and it will draw 1.5Amps of current. It will then output 19.5V of DC electricity and 3.33 Amps of current. Notice it also states 50-60 Hz, this is the AC frequency and we’ll look at that in just a moment.

In AC electricity the voltage and current constantly change direction between forwards and backwards. That’s because there’s a magnetic field in the AC generator which essentially pushes and pulls the electrons in the wires. This is therefore changing between positive and negative values as it flows forwards and backwards, the voltage is not constant, even though the multimeter makes it look like it is. If we plotted this, we get a sine wave pattern. The voltage changes between a peak positive and peak negative value as the maximum intensity of the magnetic field passes the coils of wire.

This example reaches 170V at its peaks, so if we plotted these values we have positive and negative peaks of 170V. If we took the average of these values we get zero volts. That’s not very useful, so a clever engineer decided to use the root mean squared voltage. That is what our multimeters calculate when we connect them to the electrical outlets.

For example here I have a North American, British, Australian and European power outlet. This multimeter shows basic wave forms and when I connect to any of these between the phase and neutral, we see a sine wave, indicting it is AC electricity. Notice that the British and European outlets are 230V, the Australian is 240V but all three are at a frequency of 50 Hz, however the north American outlet reads 120V at a frequency of 60Hz.

This solar panel also produces DC, we can see it produces a flat line at around 4V on the multimeter. We can use this adapter to measure a USB port, we can see it’s providing around 5V and if we plot this with the other multimeter, we again see a constant flat line indicating it is DC electricity.

This only converts AC to DC, it will not convert DC to AC. For that we need an inverter, which uses special electronic components to achieve that but we won’t cover that in this article.

By the way we have covered how power inverters work in detail in our previous article, check that out HERE.

The rectifier consists of diodes. A diode is a semiconductor device which allows current to flow through it, but, in only one direction. So, if we connect this lamp to a DC power supply, it will illuminate. We can reverse the leads and it will still illuminate. If I place a diode on the red wire, and connect this to the positive, it will again illuminate. But now, when I reverse the leads, the diode blocks the current and the lamp remains off. So, it only allows current to flow in one direction and we can use this to control the direction of current in a circuit to form DC electricity.

If we looked at an AC supply, with a step down transformer which reduces the voltage, the electrons are flowing forward and backwards. So, the load experiences a sine wave. The load could be anything from a resistor, a lamp, a motor etc.

If we inserted a diode, the diode will only allow current to flow in one direction, so the load now experiences a pulsating wave form. The negative half of the sine wave is blocked. We can reverse the diode to block the positive half and only allow the negative half. This is therefore a half wave rectifier. The output it technically DC, because the electrons only flow in one direction, it’s just not a very good DC output as it is not completely flat.

If I connect two lamps in parallel, one with a diode, we see the one without the diode is brighter because it’s using the full wave form. The other lamp is dimmer because it’s only using half of this. If we view this in slow motion, we see the diode connected lamp is flickering more because of the gaps in power.

Therefore we can use this for simple circuits such as lighting, or charging some batteries but we can’t use it for electronics as the components need constant power, otherwise they will not work correctly.

We can add a capacitor in parallel with the load to improve this output. We’ll look at that later in this article. A better improvement is to use a full wave rectifier, and there are two main ways to do that.

The current flows in one direction through the load, so it is considered DC, but it is still pulsating, although there are no gaps. The negative half has been converted into a positive half. The waveform is not smooth, so we need to apply some filtering, such as a capacitor. We’ll look at that in detail, later in this article.

In this circuit here we can see that rectified waveform on the oscilloscope. But it is not a flat DC output, so we need to improve this by adding filtering.

Using a rectifier will result in a ripple in the wave form. To smooth this out we need to add some filters.

The basic method is to simply add an electrolytic capacitor in parallel to the load. The capacitor charges during the increase in voltage and stores electrons. It then releases them during the decrease, this therefore reduces the ripple. The oscilloscope will show the peaks of each pulse, but now the voltage doesn’t decrease to zero, it slowly declines until the pulse charges the capacitor again. We can further reduce this by using a larger capacitor or by using multiple capacitors.

In this simple example you can see the LED turns off, as soon as the power is interrupted. But, if I place a capacitor in parallel with the LED, it remains on because now the capacitor is discharging and powering the LED.

We also see that without a capacitor, the output voltage is lower than the input voltage because of the voltage drop of the diodes.

Here we have a simple full wave bridge rectifier. On the input we see there is 12V AC, on the output we have 10.5V of DC. The voltage on the output is lower because of the diodes. Each diode has a voltage drop of around 0.7V. If we look at this circuit, with a diode and an LED. We can measure across the diode to see a voltage drop of around 0.7V. The current in our full bridge rectifier must pass through 2 diodes on the positive half and 2 on the negative half. So, the voltage drop combines and is around 1.4 to 1.5V. So the output is reduced.

There’s 0.7v drop here and here. So 16.9 subtract 1.4V is 15.5V. The capacitors are charged up to this voltage. This is only the approximate answer, the amount of ripple and the actual voltage drop of the diodes will cause it to be slightly different in reality, but we can see the output is higher than the input.

Another common filter is placing two capacitors in parallel with a series inductor between these. This is used for circuits with larger loads. The first capacitor smooths the ripple. The inductor opposes the change in current and tries to keep it constant and the second capacitor, which is much smaller, will then smooth out the final remaining ripple.

Additionally, we can also connect a voltage regulator to the output. This is very common and allows some variation on the input, but will provide a constant output voltage. This again has capacitors on either side of the regulator to ensure a smooth DC output. Here’s a real version which is connected to a 12V ac supply and we see it has an output of around 5V DC.

You can learn to build your own voltage regulator in our previous article HERE.