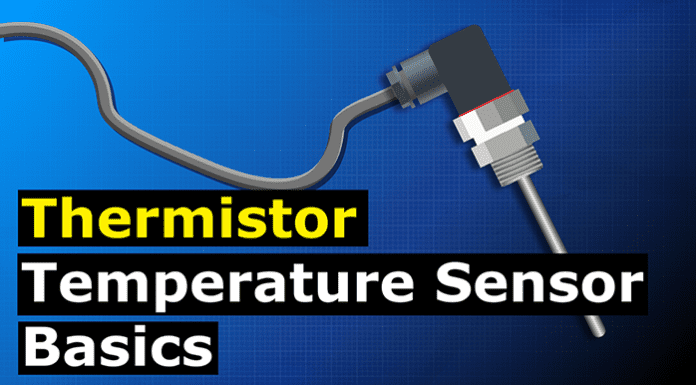 Thermistors have a few variations in design, but these two are fairly common. The flexible version and the more rugged fixed version. A Thermistor is just a thermal resistor, meaning it’s an electrical resistor which changes resistance with temperature. But there are two types of thermistor, the NTC or negative temperature coefficient and the PTC, the positive temperature coefficient. We saw earlier that the resistance of a metal typically increases as its temperature increases, and that was because the atom started to vibrate, which makes it harder for an electron to flow through the material without colliding.

The PTC type thermistor behaves something like this. We call it positive because if we plotted the resistance with temperature, then we get an upward trend showing an increase in resistance with temperature. The other type is the NTC or negative temperature coefficient. With this type, we use a semiconductor which behaves a little differently. As you might guess we call it a negative temperature coefficient, because when we plot the resistance of temperature, this type will actually decrease in resistance. This is to do with the structure of the atom of the material. If we look at a simplified atom of a metal, we have the nucleus at the centre and then a number of electrons, all on different orbital shells. A conductor has one to three electrons in its outermost or Valent shell. Each shell holds a maximum number of electrons, and an electron has to have a certain amount of energy to be accepted into each shell.

The electrons farthest away from the nucleus have the most energy. We need electrons to be able to move between other atoms in a material for it to carry electricity. Electrons are held in place by the nucleus, but if they can reach the conduction band, then they can break free and move. With the methyl atom the conduction band and the valence shell overlap, so it’s very easy for an electron to become free and move. With an insulator, the outermost valence shell is packed. There’s very little to no room for an electron to join.

The nucleus has a tight grip on the electrons and the conduction band is far away so the electrons can’t reach this and escape. Therefore, electricity can’t flow through this material. However, with a semiconductor, there’s one too many electrons in the outer shell for it to be a conductor, so it will behave as an insulator. But as the conductor band is quite close, if we heated the material up, some electrons will gain enough energy to make the jump and break free from the atom. As more heat is added, more electrons move from more atoms and so the material’s resistance decreases, so it’s basic construction is just a piece of semiconductor between two conductors, and this is sealed with a protective coating.

Area of an Ellipse

Chiller Cooling Capacity – How to calculate