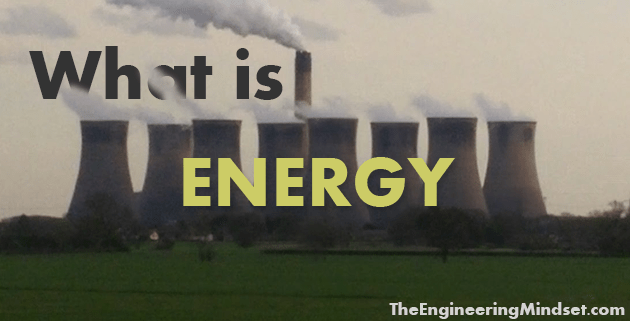 Energy is all around us and throughout the entire universe. It’s inside of all us and we consume and generate it every day, we wouldn’t exist without it. Energy isn’t just food, Gas, petrol or electricity, it come in many different forms such as Kinetic, Potential, Thermal, Chemical, Electrical, Electromagnetic, Sound, Nuclear etc..

Energy is the ability to do work. Man soon realised that he could harness different forms of energy to do work for us. We realised we could use horses to plough our fields, then we built trains, cars, cranes, planes and rockets to carry objects for us but we would later realise that we could use energy as a weapon as well as a deterrent of war.
The first law of thermodynamics states that energy cannot be created or destroyed, it can only change forms. The amount of energy in our universe is finite or fixed.

Let’s look at some examples of the different forms of energy:

Kinetic – kinetic energy can be found in anything that is moving. When you swing a hammer, the hammer has kinetic energy. If the hammer is swung towards a nail, it has the ability to drive the nail into the wood, if it collides with it, we class this as doing “work” for us.

Electrical – Electrical energy is the flow of free electrons from one atom to another. The atoms consist of protons which are positively charged, neutrons which have no charge and electrons which are negatively charged. We can eject an electron by forcing it out with another electron or we can pull it out by attracting it with a proton. When an electron leaves the valence shell it is known as a “free electron” which can move around in any direction within the space between atoms. If we connect a copper wire to a battery and make a circuit, then we can force electrons to be ejected from the valence shells where they will flow in the same direction, and thus we have electricity.

Electromagnetic – Electromagnetic energy moves in wave forms and is the basis of radio waves, light, thermal radiation and microwaves etc. The different waves of energy do different things depending on their wavelength and frequency and we humans have harnessed this for heating, communication, navigation and healthcare etc. The greater the wave’s energy the shorter the wavelength and the higher the frequency, an example of this is the ultraviolet light which is emitted from the sun. Ultraviolet light is considered to have a high level of energy because its photons have short wavelengths and a high frequency, the energy of this wave is powerful enough to penetrate and damage your skin.

Sound – Sound is the vibration of air molecules, the vibration is caused by the compressions and expansion of these molecules which propagate the vibration further along. When we talk we cause sound waves and we use the chemical energy from our food to generate this.

Nuclear – Nuclear energy is released in two processes, either “fusion” where nuclei’s combine to change the structure of the atom or in the other process called “fission” where the nuclei’s split apart. Our current nuclear power stations (and war heads) use the fission method, although fusion is being developed which is a far safer method and can release vast amount of energy, this is how the sun generates its light and heat.

Battery Life Calculator- How long will it power a circuit?