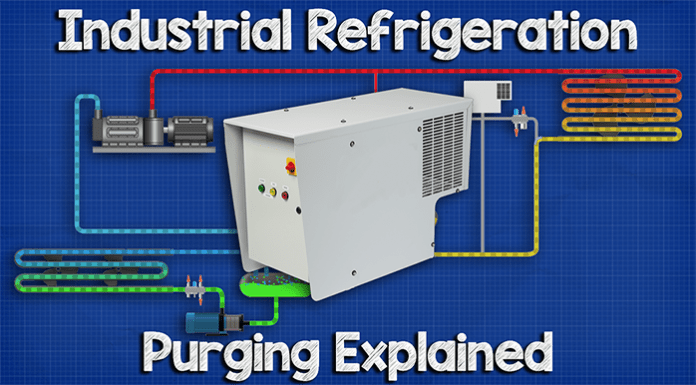 If we look at a typical single stage industrial ammonia refrigeration system, we have the compressor which pushes the high pressure ammonia vapour to the condenser. All the unwanted heat from the cooling space is removed from the refrigerant in the condenser and this heat is then dispersed to atmosphere.

The ammonia pickups the unwanted heat from the evaporator and this will cause it to boil and evaporate. It leaves the evaporator and enters back into the liquid separator as a liquid / vapour mixture. The refrigerant which is liquid falls down and repeats the cycle again, but the refrigerant which is vapour rises and will be sucked into the compressor suction line. This low pressure vapour refrigerant is then compressed and sent around the system in a continuous cycle.

That’s our basic industrial ammonia refrigeration cycle. We’ve covered this in much greater detail in our previous article. To check that out CLICK HERE

Why Do We Need To Purge?

In this system we’re going to get a build up of non-condensable gases and air in two main locations. At the top of the receiver above the liquid refrigerant and at the top of the drop leg at the outlet of the condenser. These gases and pockets of air will decrease the systems efficiency therefore reducing the cooling capacity and increasing the energy consumption. It is inevitable that air will get into the system so we need to purge these to maintain optimal performance.

How Do We Do This?

What we do is connect the purging unit to both the locations where air and gases accumulate and control access to these with solenoid valves. We also have another pipe connected back to the liquid line, this will act as a drain and return any ammonia which is collected during the filtering.

Inside A Purging Unit

Let’s have a look inside the purging unit to see how it operates. We’ve just illustrated this a little different to make it easier to see.

So as you can see inside the purging unit we have another, separated and much smaller, refrigeration system. We have a small compressor which is pushing a different refrigerant, R452A, around the separated circuit. It flows to a small condenser with its own fan which blows ambient air across the heat exchanger, the refrigerant then flows to a receiver, it then flows to an expansion valve, into an evaporator and back around to the compressor.

The evaporator is connected to the ammonia system. But the two systems are completely separated, the ammonia and the R452A never meet or mix.

The controller signals for one of the solenoid valves to open and vent the mixture of air, ammonia and non-condensable gases into the evaporator within the purging unit. Only one valve can open at a given time because if both open; then liquid refrigerant will rush in and flood the unit.

We’ve covered how solenoid valves work in detail in a separate article, to check that out CLICK HERE.

So with one of the solenoid valves open, lets say the receiver tank valve for example, then the mixture of air, ammonia vapour and other gases is going to seep out of the receiver tank and into the evaporator of the purge unit.

These vapours and gases will build up in the evaporator. The small refrigeration system is cycling the R452A refrigerant on the other side of the evaporator and will provide cooling to the gas mixture.

The mixture will be cooled down below the condensing temperature of the ammonia, this causes just the ammonia to condense into a liquid. The air and gases will remain in gas form because their properties are different and their condensing temperature is much lower. So the air and gases will remain in the evaporator while the ammonia turns into a liquid and this will then flow back via gravity into the system through the drain line. As this occurs, it naturally draws in more air, ammonia vapour and gases.