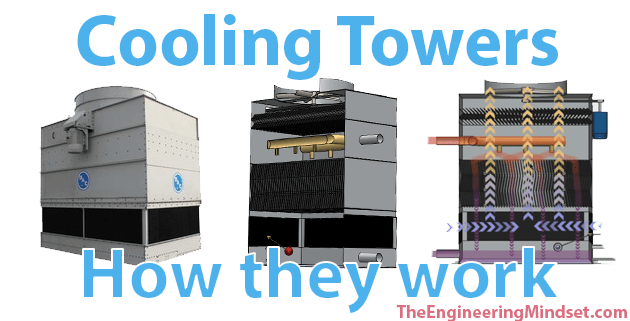 In this topic, we will look at how a cooling tower operates. This will cover the basic workings of  the most common type of cooling tower “wet” or “open” which you will find on most commercial high rise and industrial sites.

Why are open cooling towers the most common?

How do they work?

Parts of a cooling tower

Fan: The fan pulls cool ambient air in through the filters at the base and pushes it out the top of the cooling tower, taking heat and moisture with it.

Drive Belt and Drive Motor: The simplest method of spinning the fan blades. It could also be direct drive, chain driven or gear mounted.

Drift Eliminator: This causes the air to change direction and condense some of the moisture in the leaving air which reduce operating costs.

Condenser Water Inlet: This is where the warm condenser water enters the cooling tower

Spray Nozzles: The warm condenser water is pushed through these nozzles, causing it to spilt into a spray of small droplets.

Fill Packaging: The condenser water spray droplets run down this increasing the heat transfer surface area and allowing the air (which flows in the opposite direction) to carry some of the heat away as well as moisture from the evaporation.

Filter: This is where the fan pulls it’s air in from. The filter limits the amount of dirt and leafs entering the cooling tower. Air enters cooler and dryer here then when it leaves at the top.

Condenser Water Outlet: This is where the condenser water will leave the cooling tower. It will leave at a lower temperature than when it entered at the top.

Overflow: If the water level in the basin gets too high, it will flow through here and out to a drain.

Drain: Water will be drained from the cooling tower for maintenance purposes but also periodically during normal operation when the level of impurities in the water gets too high. The impurities are from the accumulation of dirt and salts which build up as water evaporates and leaves these behind. This is often reffed to to “blowdown”.

How does a cooling tower reject heat?

The warm condenser water enters near the top of the cooling tower. It passes through some nozzles which spray the water in small droplets across the fill packaging. The spray increases the waters surface area which allows it to reject more heat.

The water is sprayed across the fill packaging

These droplets, from the spray, run down the fill packaging causing a thin film of water on its surface. The water will evaporate into the air and carry heat away with it.

For greater cooling capacity, cooling towers use a fan to create more evaporation. The fan pulls air through the filters at the bottom of the unit and move it up and out through the top of the cooling tower, passing through the fill packaging and drift eliminators. The air flows in the opposite direction to the flow of condenser water.

Combining the spray of water, the thin film of water on the fill packaging and the flow of cool air you get a great amount of heat transfer.

Just to recap. Warm condenser water enters the tower and is sprayed over the fill packaging. This spray runs down the fill packaging creating a thin film of water over it, the water will evaporate and cool down. Cool dry air enters through the bottom of the tower and passes through the fill packaging in the opposite direction to the flow of condenser water, this will pickup heat and moisture from the thin film of water. The condenser water will leave the bottom of the cooling tower at a lower temperature. The air will leave the top of the cooling tower with that heat but it will also carry some of the water away with it.

Water costs money. So in order to keep operating costs and water consumption down, cooling towers often use drift eliminators. These are located above the fill packaging and spray nozzles but below the fan.

The drift eliminators purposely change direction to cause the leaving air to condense against the sides. This squeezes some of the moisture out of the air which then runs back down to the fill packaging for further cooling and eventually accumulates in the basin of the cooling tower to be sent back to the chiller.

The cooler condenser water accumulates in the basin of the tower. This returns to the chiller where it will pickup more heat and the cycle starts over again. A filter is usually present over the outlet to ensure no foreign objects enter the pipe as this will enter the blades of the pump.

A float valve in the basin operates the flow of water from the makeup water inlet and ensures a minimum level of water is maintained. This water is topped up because of evaporation losses and also during blow downs.

The overflow prevents too much condenser water entering the cooling tower basin. Water entering here will usually be sent to drain.

The drain usually has an automated valve attached. Sensors located in the basin or the condenser system pipework will detect the level of impurities (dirt and salts) and will start to drain the water if the level is too high. This draining is known as the “blowdown” and causes the float valve to drop which allows fresh water to enter through the makeup inlet. The impurities are already in the condenser water as well as the air, but as the water evaporates it leaves these behind. If enough water evaporates it will cause a build up of impurities which can damage the equipment as well as reduce the cooling tower, chiller and pump effectiveness and efficiency.

In cooler climates, some cooling tower basins will have an electric pan heater installed. This turns on at a specified minimum air temperature (e.g. 5°C, 41°F) to prevent frost.

Watch the video tutorials below for further information.

Area of a Rhombus