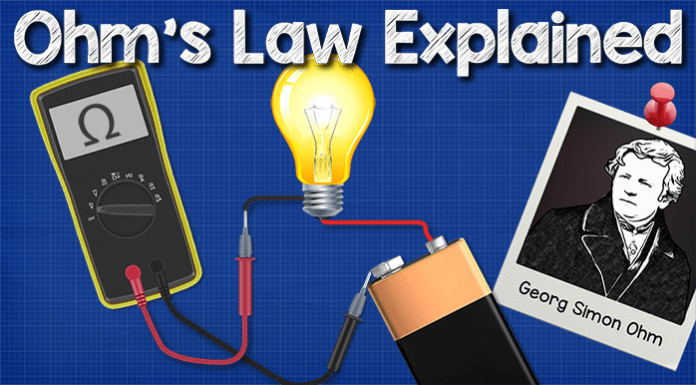 Learn how to understand Ohm’s law, how it works as well as how to use it.

There’s also 2 problems at the end of the article for you to test your knowledge and solve.

What Is Ohm’s Law

Ohm’s law is the relationship between voltage, current and resistance and how they relate to each other. Ohm’s law was developed by a German physicist named Georg Ohm who undertook many experiments to develop his theory including measuring current by touching electrical circuits to see how much it hurt. The higher the current, the more it hurt.

Now there are three formulas we need to use for ohms law. BUT we don’t need to remember these as we’ll show you a super easy tip in just a moment.

So  the three formulas we use are:

So you just need to remember the three letters in this order, VIR. Then just write them in a triangle with V at the top and draw a line to separate them.

In fact you don’t even need to remember those because we’ve made a FREE PDF guide with some worked examples which you can keep on your PC or mobile and access whenever you need. Click here to download

Now all we do when we need to use a formula is cover up the letter we need.

So if we want to find the voltage, we write V = and then cover up the V in the triangle, that leaves us with I and R. So we write I x R. Which means Voltage = Current multiplied by Resistance. You can write a little multiplication symbol in the triangle between the two letters if it helps you.

We know what you’re thinking. Why is current represented with the letter I and not a C for current or even an A for the unit for Amperes. Well the unit of current is the Ampere or Amp which is named after André Ampère, a french physicist. A couple of hundred years ago he undertook lots of experiments many involved varying the amount of electrical current, so he called this intensité du courant or intensity of current. So when they published his work, they took the letter I and it become standard until this day.

You might also come across formulas where the letter E is used instead of V. The E stands for EMF or electromotive force but don’t worry about that, just stick with using V and substitute V for E if you see it used in an Ohms law question.

By covering V we get voltage = Current multiplied by Resistance.

If we want to find Current then we write down I = and then cover up the letter I. That gives us V and R and as V is above the R like a fraction, we can write V ÷ R. Therefore Current is equal to Voltage divided by Resistance.

If we want to find Resistance then we write R = and cover up the R, that leaves us with V and I so we write V ÷ I which gives us resistance = Voltage divided by current.

Let’s look at some examples for how to use these formulas. First, lets see how we find voltage and how it relates to the other parts.

Lets say we have a simple electrical circuit with a battery and a resistor. We don’t know what voltage the battery is though. The resistor is 3Ω and when we connect a multimeter into the circuit we see that we get a reading of 2 Amps.

If you want to check your answers the you can use our FREE Ohm’s Law Calculator. Click here.

What’s the relationship here? We can see that current is therefore directly proportional to voltage.

Remember; voltage is like pressure. It’s the pushing force in the circuit. It pushes the electrons around the wires and we place things like lamps in the way of the electrons so they have to flow through it and this causes the lamp to light up.

By doubling the voltage we see that the current also doubles, meaning more electrons flow as we apply more pressure. Just like if we use a bigger pump, more water will flow.

Lets say we now have a 3Ω lamp connected to a 6V power supply. To find the current we write down I = and cover up the I in the triangle. That gives us V ÷ R so Current equals Voltage divided by resistance. We know the voltage is 6V and the resistance is 3 ohm so the current is therefore 2A and that’s what we see with the multimeter.

By the way if you don’t have a multimeter then we highly recommend you get one, it’s essential for trouble shooting and also building your electrical knowledge. There are some links down below for which one to get and from where.

So we saw what happens when we use a resistance of 3 ohms in the circuit. But If we double the resistance to 6 ohms by placing another 3 ohm lamp into the circuit, the current halves to 1A.

If we double the resistance again to 12 Ohms, the current will half again to 0.5A. We can visually see this because the lamps will become less bright as the current reduces from the increase in resistance.

Current is the flow of electrons or the flow of free electrons. For us to make this lamp shine we need to push electrons through it. How do we do that? We apply a voltage across the two ends. The voltage will push the electrons. The atoms inside the copper wire have free electrons in their valance shell which means they can very easily move to other copper atoms and they will naturally move to other atoms by themselves but in random directions which is no use to us. For the lamp to turn on we need lots of electrons to flow in the same direction. When we connect a voltage source we use the pressure of the battery to push the electrons through the circuit all in the same direction.

For example, to power this 1.5 ohm resistive lamp with a 1.5V battery, requires 1 amp of current which is equal to (6,242,000,000,000,000,000) six quintillion two hundred and forty two quadrillion electrons passing from the battery and through the lamp, every second, for the lamp to stay on at full brightness. If the voltage or current reduces or the resistance of the circuit increases then the lamp will become dimmer.

Say we have a resistive lamp connected to a 12V power supply. We don’t know how much resistance it’s adding to the circuit but we measure the current as 0.5 A.

To find resistance we write down R = and cover up the R on the triangle. We’re left with V and I so Resistance = Voltage divided by current. We know the voltage is 12V and the current is 0.5A so 12 divided by 0.5 gives us 24 Ohms of resistance.

Resistance is the opposition to the flow of electrons. It tries to prevent electrons from flowing. That’s why we use resistors in circuits to reduce the current and protect the components such as an LED. If we tried to connect an LED directly to a 9V battery it will blow out because the voltage and current are too high. But when we add a resistor into the circuit, these are reduced so the LED is protected and will shine brightly.

Can you solve these problems?

Problem 1) Lets say we have this lamp which has a resistance of 240 ohms. If we plug this into an outlet in the US, which uses 120V, what will the current be?

Problem 2) If I plugged the same 240 ohm resistor lamp into an outlet in the UK, we get a current of 0.958A, so what is the voltage being applied?