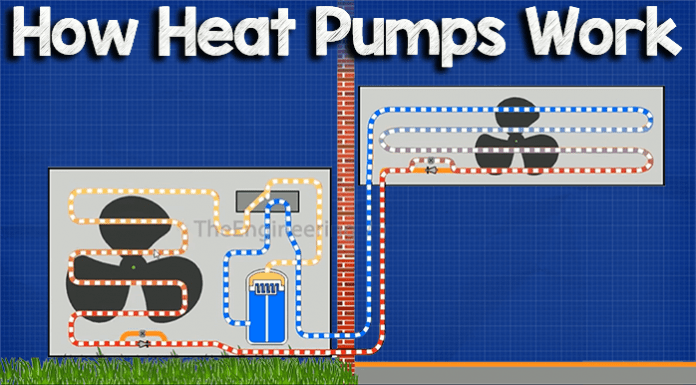 The main parts you will find on any system as the indoor unit, the outdoor unit and some pipes joining the two.

The indoor unit might be installed into a ducted system, this is very common in North America. Either way, they all basically work the same.

Removing the covers we’re going to find the following components. Within the indoor unit, we find the heat exchanger, then we have the expansion valve and check valve as well as a small fan to circulate the room air.

Inside the outdoor unit we have the compressor. This is the driving force of the refrigerant around the system. We will again find a heat exchanger in this unit along with a fan, a reversing valve, check valve and an expansion valve.

The refrigerant leaves the compressor as a high pressure, high temperature superheated vapor. That heads off straight into the top of the reversing valve. The reversing valve will decide which direction it can flow to. In this case, it’s being diverted and sent directly to the outdoor heat exchanger, where the refrigerant will be condensed, and it will give up some of its energy.

The outdoor air is cooler than the temperature of the refrigerant inside the tubes. A fan within the outdoor unit blows this air across the heat exchanger which will remove energy from the refrigerant, causing it to condense. Remember that the refrigerant always stays within the tubes, it never mixes with the air. The thermal energy just transfers through the tube wall because there is a temperature difference and hot always flows to cold.

So, that refrigerant as it enters and passes around the outdoor heat exchanger, will condense and becomes a liquid. By the time it leaves and passes through the check valve it will be a medium temperature, saturated liquid but still as high pressure. The force of all the refrigerant behind it coming out of this compressor is what’s pushing the refrigerant all the way around to the other components in this system.

In this configuration, the outdoor unit, which is acting as a condenser is there to reject the heat from the system. All the unwanted heat that the system will pick up from the indoor unit will be sent to the compressor and that will push it into the condenser, where it will reject the unwanted heat into the outdoor air. The fan is just there to help speed up that heat exchange.

When the refrigerant leaves the expansion valve, it will be a low pressure, low temperature, liquid vapor mixture. This will be pushed around the indoor heat exchanger and that will begin to pick up some of the unwanted thermal energy from the room. A fan inside the indoor unit is circulating air around the room to being the warm air into the unit as well as push the cool air out around the room.

The refrigerant enters the indoor unit, which is now the condenser, and it enters this as a high pressure, high temperature, super heated vapor.

The refrigerant flows along the liquid line straight down to the outdoor unit. The check valve within the outdoor unit will not allow it to pass through in this direction, so it’s going to go through the expansion valve instead.

Now the fan within the outdoor unit is blowing air across the heat exchanger which is a higher temperature than the boiling point of the refrigerant. The refrigerant therefore boils and picks up some of the heat from this air.

That’s going to turn that refrigerant into a low pressure, low temperature, saturated / slightly superheated vapor. That will then head straight towards the compressor, where it will then pass through the compressor, and repeat the entire cycle again.

So, the refrigerant is picking up that thermal energy from all the air that’s outside, and taking that to the compressor. The compressor compresses it, squeezes that together which increases the temperature as the refrigerant particles are now colliding more, and forces it out towards the indoor unit.

Now, a lot of people say, “Well, what about in the winter time? The air is cold. There’s no energy in there. How do you take energy from the air then?” Well, actually, that air still has a lot of energy, and certainly enough the be extracted by a heat pump. As long as the air is above -273 degrees Celsius, then there is energy in that air, which can be extracted. Obviously, we’re not going down to that temperature in our climates. However, the lower the temperature the harder it is to extract energy and at some point the system will use more energy than it extracts.

The reason you can extract thermal energy from the air depending on the temperature, is because the boiling point of the refrigerant is very low.

If we compare water and some common refrigerants. We know that water boils at around 100 ° C (212 ° F) and at that temperature it becomes steam, the steam leaves the body of water and carries the heat away. Refrigerant on the other hand will boil at extremely low temperatures in comparison. So as long as the air temperature is above this boiling point temperature, it can pickup heat.

Circumference of a circle