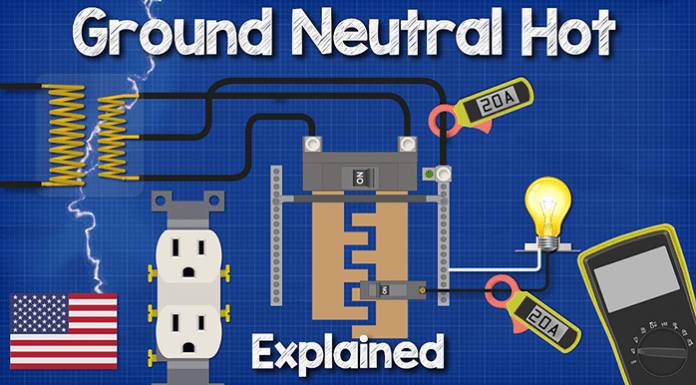 Neutral, Ground and Hot wires explained. In this article we’re going to be looking at the difference between hot, neutral and ground wires as well as the function of each with some examples. This topic is for homes in north America. If you’re outside this region then you can still follow along but your system will work and look different to this so check our other topics.

Scroll to the bottom to watch the YouTube tutorial on Ground, Neutral and Hot wires.

Remember electricity is dangerous and can be fatal. You should be qualified and competent to carry out any electrical work. Never work on live/hot electrical circuits.

Before we get into this video there are three things I need you to remember.

1) Electricity will only flow in a complete circuit, if you come into contact with an electrical conductor, your body might complete the circuit.
2) Electricity always tries to return to its source.
3) Electricity takes all available paths to complete a circuit. It takes preference to a path with less resistance and more current will flow in that path.

We’re going to be looking at the hot, neutral and ground wires for a typical north American residential electrical circuit. But first we will see a really simple circuit to understand how it works, then apply this knowledge to a complex residential installation.

When we look at a simple electrical circuit with just a battery and a lamp. We know that to turn the lamp on we need to connect both ends of the wires to the terminals of the battery. Once we connect these wires, the circuit is now complete and electrons can flow from the negative, through the lamp and back to the positive terminal.

Electrons flow from Negative to Positive. This is called Electron flow. Originally it was believed they flowed from Positive to Negative. This was later found to be incorrect and we call this Conventional Current.

If we look at a residential electrical system in north America then we will find two hot wires, a neutral wire and some ground wires. If you want to see how this works in detail, then we have a tutorial video for that click here to see.

Imagine for a second that the homes electrical system is connected to a battery and we have just one hot wire and a neutral wire. As we saw with the simple circuit, for the light to turn on we need a hot wire to supply the current to he load, and we need a neutral wire to return the current to the source. Electricity therefore flows through the hot, through the bus bar and circuit breaker and into the light. It then travels back through the neutral and to the source.

The electricity in this circuit is AC alternating current, which is different from the DC direct current we saw with the battery. With DC the electrons flow directly from A to B in one direction much like the flow of water down a river. But in our homes we have AC alternating current which means the electrons alternate their direction between forwards and backwards much like the tide of the sea.

Now in north America we have a split phase supply to most residential properties, so we have the two hot wires and one neutral wire. We simply have two 120V coils connected together in the transformer, the neutral is then connected to the centre between the two coils.

If you don’t have a multimeter I highly encourage you to get one, it’s an essential tool for any find finding and electrical work.

We can measure the current in a cable using a current clamp meter.

If we have another load on our other half of the coil, between the other hot and neutral, and the load is a different value say for example 15Amp, then the neutral will only carry the difference between these two values back to the transformer. In this case 20A – 15A = 5A so the neutral will carry 5A back. The rest of it will pass through the two hot wires. This is what we will have in most cases because there are multiple circuits all with different loads.

If we had a load on both coils and they are of equal value, say for example 15A each, then there will be no current flowing in the neutral wire. It’s all flowing back and forth on the two hot wires between the loads and the source. That’s because it’s AC alternating current and the transformer is centre tapped with a neutral, so while one half is moving forwards, the other half is moving backwards and the current will flow into the other circuit instead of back via the neutral.

What does the ground wire do?

The ground wire under normal operating conditions will not carry any electrical current. This wire will only carry an electrical current in the event of a ground fault. Hopefully this wire will otherwise never be used at all for it’s entire life. It’s just there as an emergency path for the electricity to get back to the power source instead of it passing through you. The ground wire in most cases is a bare copper wire, it’s uninsulated, but it is sometimes covered with a green insulation. This wire has a very low resistance so electricity will prefer to travel along it because it’s easier and can get back quicker.

Going back to the simple circuit with a battery and lamp. If we now take another wire and run this from the positive terminal over to the lamp and connect it to the metal lamp holder, this is effectively our ground wire. It’s not being used to carry electricity. If the hot wire touches the metal casing, then the electricity will now flow through the ground wire instead. If the hot wire comes into contact with both the neutral and the ground, then it will flow through both wires back to the source but as the ground has less resistance more current will flow through it.

When electricity finds a way to leave its circuit and return to the source through a different way than it’s neutral wire, we call this a ground fault.

We therefore connect ground wires to anything that could potentially become a potential path for electricity to leave it’s circuit such as the metal pipes, the metal plates of the light switches and outlets and their boxes. We also need to run one to the outlets because often our appliances will have metal casing, like washing machines and microwaves.

When you look at a receptacle and plug you’ll see there is a hot terminal, a neutral terminal and a ground terminal. The casing of something like a washing machine is connected to a ground wire in the lead which goes to the plug, through the receptacle and back to the panel to save you from an electric shock.

Now lets say you’re outside with no shoes on and the ground is moist. If you touch a hot wire, you will complete the circuit and the current will pass through you to get back to the supply. In this case, the resistance is very high so the current might not be high enough to automatically flip the breaker and cut the power. This will likely lead to the persons death.

Luckily we have the GFCI receptacle or GFCI breaker. GFCI stands for Ground Fault Circuit Interrupter. We’ll look at the circuit breaker version but they essentially work the same.

Connected to the main panel we will find a thick copper wire which leads to a ground rod. The ground road is buried into the ground outside near the property. This rod is not used for ground faults. It’s purpose is to dissipate static electricity and high external voltages like lightening strikes.

There is also a ground rod connected to the neutral at the transformer. Many people think that during a ground fault, electricity flows through their ground rod and into the earth. But remember electricity tries to get back to it’s source. As there is a ground rod at the transformer there is a potential path for the electricity to get back to the source. BUT, this path will have a very high resistance, or impedance as this is AC, and as we know electricity will take preference over the path with least resistance. As we already have a low resistance ground wire which provides a path directly back to the source, the ground fault is going to take this route instead.

When it comes to lightening, the source of lighting is essentially the earth. So lightening is trying to get back to it’s source which is the earth. If lightening strikes the utility cables it will flow along the wires to get to the ground rods of both the transformer and the main panel, to get back to the earth. Otherwise it’s going to blow all our circuits and cause fires.

If the hot wire came into direct contact with the ground rod, then electricity will flow through the soil back to the transformer but the resistance is very high so the current will be low. This means the circuit breaker will be unlikely to detect this fault and the breaker will not automatically flip to cut the power.

Chiller Efficiency How to calculate