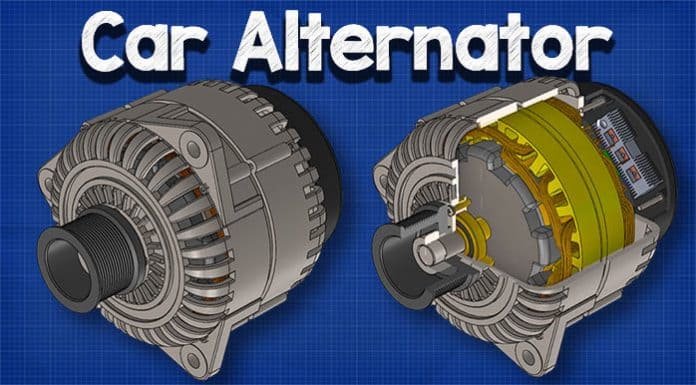 Learn how the alternator works. This device is an essential part of  every combustion engine vehicle’s electrical system. So, what does it do and how does it work. In this article we will be looking at the typical car alternator to understand how it works, the main parts as well as why and where we use them.

What is an Alternator

An alternator looks something like this. We find the alternator within the engine bay of the car.

So the alternator converts the Alternating current into direct current via a rectifier. The output voltage of the alternator varies with the speed of the car, so the alternator also uses a regulator to limit this and maintain a near constant output.

Why is an Alternator Used

Every modern vehicle needs electricity to operate, this is used to power things such as the lights, music system, electric windows, window wipers etc.

The engine combusts fuel. This is used to turn the crankshaft and propel the vehicle along. The engine only provides mechanical force, it does not produce electricity. So, we need a way to power all the electrical devices within the vehicle and that’s where the alternator comes in.

In the engine bay we also find a 12V lead acid car battery. This stores energy in the form of chemical energy, it does not store electricity.

By the way we have covered how the car battery works in great detail, check that out HERE

When the engine is off, the battery powers the cars electrical components. This will drain the battery though.

When the car starts, the battery provides a huge amount of current to the starter motor which turns the flywheel and starts the engine. The battery is again partly drained during the start up because of the large current required to turn the starter motor.

If the battery is left to discharge for too long, it will not be able to provide the large current necessary to start the starter motor and the car will need to be jump started.

Let’s have a look at the main parts of the alternator. At the front of the unit we find the pulley. This is a wheel which has grooves cut into it that help grip the belt that provides the rotational force from the engine.

The pulley wheel is attached to the shaft which runs through the entire length of the alternator.

The internal components are held inside the main housing. The housing consists of 2 parts, the front and rear bracket. There are some slots cut into the casing to allow air to pass through and remove the unwanted heat which is generated.

At the back of the unit we have the electrical connections. There are many different designs but this is an example of a simple 3 wire design, with an internal regulator and rectifier which has the following terminals:

To complete the circuit, the electricity flows back through the cars frame to or from the battery’s negative terminal.

As this unit has an internal regulator and rectifier, we find these components at the rear of the unit, usually under a protective cover. We’ll see those in more detail shortly.

By removing the housing we can see inside the unit. The first thing we see is the stator. The stator is stationary and does not rotate.

This consists of a number of laminated sheets which have a pattern of slots around the inner edge.

Then we find 3 separate sets of copper wires which are wound between these slots in a certain order. One end of each coil is connected together to form a neutral point, this is a star configuration.

Each coil set will produce a single phase of AC electricity, providing 3 phases in total. The other end of each coil passes through the case and attaches to the rectifier.

The alternator produces AC alternating current but the battery and electrical devices of the car need DC. So the rectifier is going to convert the AC into DC electricity.

At the centre of the alternator we find another coil of wire which is wound around an iron core and is connected to the shaft. The shaft also holds two slip rings. The slip rings are connected to opposite ends of the coil. Within the rear housing we find some brushes. These are some spring loaded carbon blocks which are pushed outward to rub against the slip rings to form an electrical connection. The car battery initially provides electricity to the coil via the brushes. As the electricity passes through the coil, it generates an electromagnetic field.

To enhance this electromagnetic field, two iron claws are placed either end of the coil which interlock with each other. One end will become the north pole, the other will become the south pole.

How Electricity is Generated Within the Alternator

Electricity is the flow of electrons in a wire. The copper wire is made from millions and millions of copper atoms. Each atom has a free electron. This is an electron which is able to move freely between other atoms. It does move to other atoms by itself but this occurs randomly in any and all directions which is of no use to us.

If we move the magnet in and out repeatedly, the current will therefore alternate between flowing forwards and backwards. This is how AC or alternating current in generated. The current is alternating in direction.

If we move the magnet faster, a stronger current is generated.

If we use a stronger magnet, then the current also increases.

If we use a larger coil with more turns, then this will also generate a larger current.

Instead of using a permanent magnet, we could use an electromagnet. As we move this in and out, it will also generate an AC current in the coil. But with the electromagnet we can adjust the current and voltage to vary the strength of the magnetic field, this lets us control how much current is generated in the coil.

With the magnet between the two coils, there is no current generated, but as the magnet starts to rotate, the strongest part of the magnetic field gets closer and closer to the coil. The coil experiences a changing intensity of the magnetic field, this will cause more and more electrons to be pushed forwards up until it’s maximum intensity. Then the magnet starts to move away from the coil, so the magnetic field begins to decrease and so does the current of electrons until it reaches zero again. Now the opposite end of the magnet begins to get closer to the coil and this pulls the electrons in the opposite direction, again to a maximum point and then decreases back to zero. So, if we plot this current on a chart, we get a sine wave with the current flowing in the positive and then negative regions. This setup gives us a single phase, AC supply.

But, we have all this empty space between the coils, which seems a bit of a waste. So, what can we do with this space? Well, we can add more coils and create more phases to provide even more power.

We still have empty space here, so we can add another set of coils at 120 degrees from the previous to create a third phase.

Instead of having 3 separate coils and 6 wires, as the phases are always switching between forwards and backwards, we can connect the ends of the coils together. The current will then flow freely between each coil as it changes direction.

Now, we are producing 3 phase AC electricity. But, all our electrical circuits and components within the car use DC or direct current. So, we need to convert AC to DC, and for that we use a full bridge rectifier.

This is essentially just 6 diodes connected in pairs and wired in parallel. If you don’t know, diodes only allow current to flow in one direction and block the current in the reverse direction. So, with a single phase supply, for every turn of the magnet, current will only flow for half of the turn, the other half will be completely blocked.

If we connected each of the 3 phases separately to a diode, then the current will flow or be blocked at different times. Therefore, we can combine the phases into a block of diodes, and only the phase nearest its maximum will be allowed to pass through. Giving us a slightly rough DC output. To smooth this out we can connect a capacitor which will basically absorb electrons and then eject electrons automatically to maintain a constant output. This gives us a constant DC supply.

By the way we have covered diodes, capacitors and power inverters in great detail previously. Do check those out here- DIODES, CAPACITORS, POWER INVERTERS.

OK, so we now have a DC output. But, if the magnet is connected to the engine, and the car speeds up, then the magnet will spin faster and that will increase the output voltage and current. We don’t want that because it will kill all of our electronic components within the car. So, we need a way of regulating the voltage.

On the power supply of the electromagnet, within the regulator, we find a component known as a transistor. The voltage sensor is also connected to the regulator.

The transistor is a type of electronic switch which can be turned on and off thousands of times per second by a controller. This can be used to control the amount of current flowing.

So by measuring the output of the alternator and then varying the open and close times of the transistor switch, we can control the current flow through the coil and the strength of the electromagnet. This controls how much electricity is being generated by the alternator to maintain a constant output.

But now that you’re all charged up, checkout squarespace.com to create your own online web presence which is packed with features to empower individuals to launch, share and promote their own projects.

You can easily schedule appointments for classes and sessions with team members and clients through their built in tool. And you can even collect payments or donations to help support your cause.