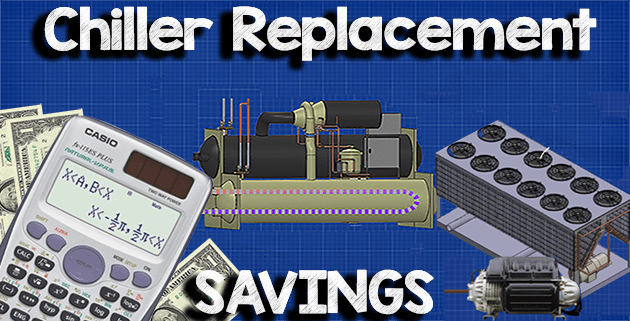 How to estimate the energy savings from replacing a chiller. In this article we’ll be looking at how to estimate the potential energy savings from replacing a chiller. We’ll look at why to replace an existing chiller, when to replace an existing chiller, how to calculate the savings as well considerations for advanced calculations.
Scroll to the bottom to watch the free video tutorial

See the wide range of Danfoss chiller solutions at http://bit.ly/SolutionsForChillers

Danfoss has a wide portfolio of products to help you boost efficiency in whatever chiller system you’re working with. Their products include compressors, AC drives, system protectors, heat exchangers, valves, electronics, and sensors.

They’re committed to helping you build better chillers — from the inside out. Learn more at http://bit.ly/SolutionsForChillers

As you probably know, chillers are typically the single largest energy consuming piece of equipment within a commercial building. There’s growing pressure on building owners, the building and facilities managers as well as engineers and contracted service companies to reduce energy consumption, carbon emissions and operating costs. As the chiller is typically the largest single energy consumer within the building, it is often looked at for energy efficiency improvements, and rightly so.

In our previous chiller article, we discussed different ways to improve the efficiency of an existing chiller, you can learn about this by clicking here, but in this article we’ll look at replacing a chiller for a newer, more efficient, option.

Why and when to replace a chiller?

Chillers have a typical operational life span of 10-25 years. Their age, condition, criticality and reliability usually play the big part in deciding when to replace a chiller. What should also be considered is the huge savings that can be achieved from the improved efficiency of a replacement chiller with newer technology and also the reduced maintenance costs.

For example, replacing an existing chiller for a Turbocor chiller in many cases is able to cut the annual energy consumption by around 30%, sometimes even higher. The maintenance costs are around 50% less because the Turbocor compressor is oil free so the only maintenance requirements are to change out the capacitors once every five years, tighten the electrical connections once quarterly, and annually dust off and clean the electronic cards. That’s it, no oil replacements, no periodic teardowns, no major overhauls.

We’ve previously discussed how refrigerants work as well as the new regulations coming into effect which will see refrigerants being phased out due to their potential to damage the atmosphere. Some chillers can be retrofitted with alternative refrigerants but the capacity is often hindered because it was not designed to operate at the performance of the new refrigerants which means you’ll almost certainly need to replace some of the components within the system.

How to quantify the energy savings from replacing a chiller

There are many ways to compare the chillers performance, one of the most common ways is to compare the (IPLV Integrated Part Load Value) or NPLV (non-standard partload value) rating. This is supplied by the chiller manufacturer on request or can usually be found in their sales and technical literature.

The IPLV or NPLV is the weighted efficiency of a chiller operating at 100%, 75%, 50% and 25% against a typical amount of time per year at specified conditions defined by ASHRAE in AHRI Standard 550/590. When a chiller is unable to operate at these specifications then it will be rated as NPLV.

There are two types of IPLV depending on whether it was calculated from the COP/EER or kW/Ton, these are just slightly different ways to calculate the efficiency but these will be stated by the manufacturer.

How to estimate annual energy consumption from a replacement chiller

There are a few ways to calculate this and it depends firstly what the calculation will be used for and what data you have.

It is not recommended to use IPLV or NPLV ratings to estimate the energy consumption for a buildings cooling system as these do not represent the load of the building, only the test data for specific conditions. It is recommended to use building energy analysis programs which are compliant with ASHRAE standard 140, these can model the buildings construction as well as weather data and reflect how the chiller will react.

However, if you’re simply wanting to perform some calculations to obtain a rough estimate of annual consumption for comparative purposes then you can use one or all of the following calculations and we’ll look at examples for each.

If you have a chiller that runs at full loading then you can use the following calculations.

To calculate the estimated energy consumption simply multiply the rated capacity of the chiller Tons with the efficiency at full load being in kW/Ton and multiply this by the annual run hours.

Alternatively, if you have the COP rating you would simply divide the chiller capacity, rated in kW, by the COP then multiply this by the operating hours per year. So to compare two chillers rated at 1758 kW. The first, a reciprocating chiller with a COP of 4.24 and the second a scroll chiller with a COP of 5.86, both units run for 3000 hours per year, then the estimated annual consumption would be equal to 1,245,035 kWh for the reciprocating chiller and 900,207 kWh for the scroll chiller.

If you have a chiller with a variable load, which is far more likely, then you can use the following method.

Dropping these numbers in we can see the reciprocating chiller consumes 343,957 kWh/y per year whereas the Turbocor consumes 153,000 kWh/y.

For a better and more accurate comparison for replacing an existing chiller you can log the cooling load profile and energy consumption at intervals, hourly should be fine, and record this over a number of months or a year. The longer the better. Then using the part load efficiency data for any potential replacement chiller, you can calculate and compare the estimated energy consumption of different chillers to see the potential savings. Lets have a look at a simplified example for a daily load profile.

From the chiller log we can obtain the daily cooling load in RT and see that the chiller runs for 10 hours per day between 8am and 5pm. Then we need the efficiency of both the existing and new chiller. In this example we’ll use kW/Ton. By multiplying the efficiency by the cooling load, we get the hourly kWh consumption.

As I said this is an overly simplified example, in the real world the chiller load will change through the seasons and would likely run much longer hours so you would need to account for this, basing the annual performance on a single week is not sufficient.

Chillers – What are they? HVAC