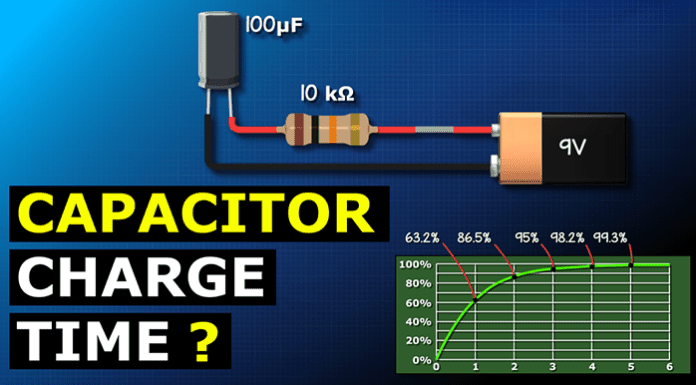 Let’s say we have a nine volt battery, a 100 microfarad capacitor, a ten Kiloohm resistor, and a switch, which are all in series. The capacitor is fully discharged and we read 0 volt across the two leads. When we close the switch, the capacitor will charge. The voltage will increase until it is the same level as the battery. The voltage increase is not instant.

It will have an exponential curve. At first; the voltage increases rapidly and then it slows down until it reaches the same voltage level as the battery. We split this curve into six segments, but we’re only interested in the first five because at the fifth marker we’re basically at full voltage so we can ignore anything past this. Each segment represents something called a time constant. Therefore, as we have five segments, we have five time constants, so it will take five time constants to charge the capacitor from zero to just under 100%.

If the resistor value increases, then the time taken also increases. Coming back to our original circuit, we can therefore calculate the voltage level at each time constant. At point 1, the voltage is always 63.2%. Point two is 86. 5%. Point three is 95%, point four is 98.2%, and point five is 99.3%. So the voltage will never actually reach 100%. That’s also why we stop at just five points. So in this example, after 1 second the capacitor voltage is 5.68 volts. After 2 seconds, it’s 7.78 volts.

After 3 seconds, it’s 8.55 volts. After 4 seconds, it’s 8.83 volts, and after 5 seconds it’s 8.94 volts. If you needed a more precise answer, we could also calculate each point like this. Remember, because this is in series, the current of the circuit decreases while the voltage of the capacitor increases. Once at full voltage, no current will flow in the circuit.

If the resistor was a lamp, it would therefore instantly reach full brightness when the switch was closed, but then becomes dimmer as the capacitor reaches full voltage.

When we provide a path for the capacitor to discharge, the electrons will leave the capacitor and the voltage of the capacitor reduces. It doesn’t discharge instantly but follows an exponential curve. We split this curve into six segments, but again, we’re only interested in the first five. At poimt one, the voltage is always 36. 8%.

So at the very moment the battery is disconnected, the capacitor will be at 9 volts. And as it’s powering the circuit, the lamp will also experience 9 volts. After one time constant- in this case, 1 second, the voltage will be 36. 8%, which is 3.312 volts.

Obviously, this will become dimmer towards the end of the 3 seconds.