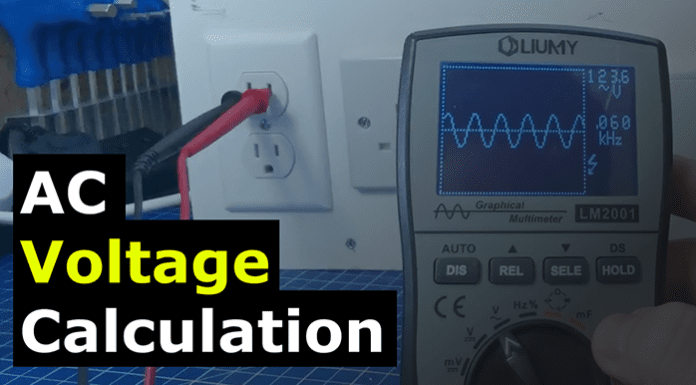 Learn how AC voltage varies with AC since wave and how to calculate the Vrms root mean squared, vmax, peak voltage, the frequency and voltage of different countries.

In AC electricity, the voltage and current constantly change direction between forwards and backwards. That’s because there’s a magnetic field in the AC generator which essentially pushes and pulls ions in the wires. This is therefore changing between positive and negative values as it flows forwards and backwards. The voltage is not constant, even though the multimeter will make it look like it is. If we plotted this, we get a sine wave pattern.

The voltage changes between a peak positive and a peak negative value as the maximum intensity of a magnetic field passes the coils of wire inside the AC generator. This example reaches 170 volts at its peaks, so if we plotted these values, we have positive and negative peaks of 170 volts. If we took the average of these values, we would get 0 volt. That’s not very useful. So a clever engineer decided to use the root mean squared voltage.

This multimeter shows basic waveforms, and when I connect to any of these between the phase and neutral, we see a sine wave which is indicating this is AC electricity. Notice that the British and European outlets are 230 volts. The Australian outlet is 240 volts, but all three of these are at a frequency of 50 Hz. However, the North American outlets read 120 volts at a frequency of 60 Hz. The frequency is measured in Hertz, but this just means the sine wave is repeating 60 times per second in the North American electrical systems and 50 times per second in the rest of the world.

The voltage is lower in the North American system at 120 volts, whereas it’s 230 to 240 volts in the rest of the world, although there are some exceptions, but we won’t go into that in this video. The peak voltage of each electrical system is therefore as follows.