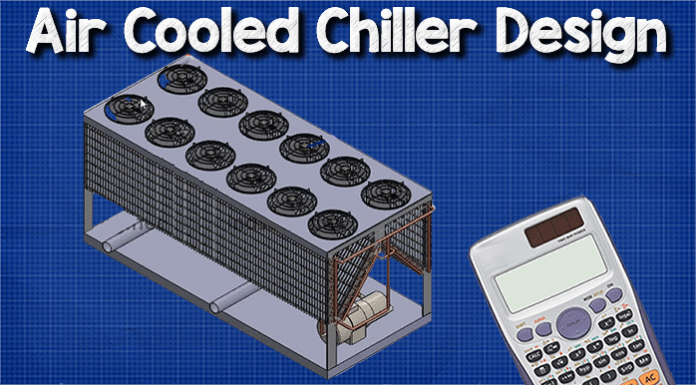 In our previous Air Cooled Chiller tutorial (click here to see), we took a very basic look of how they work, this is a follow on to that, so if you haven’t read/watched it yet then I highly recommend you do first.

The values used in the example are from actual design data, however you should not compare a chillers performance to these values. They are specific to a certain model and operating design. If you need to compare a chillers performance then contact your chillers manufacturer and ask for their design data for that model. This model is using refrigerant R134a.

The first component we start with for the refrigeration cycle is the compressor which is squeezing the refrigerant into a smaller volume to increase the temperature and pressure and then pushing that compact refrigerant around the system. From here it flows to the condenser where the unwanted heat is rejected to the atmospheric air. After that we have an expansion which expands the refrigerant to decrease the pressure and temperature, and lastly we have the evaporator which pickup the unwanted heat from the building. On the top of the chiller we have fans which will be moving air across the coils of the condenser.

Above you can see the refrigeration cycle for the chiller plotted onto two charts with the reference points numbered and illustrated on the chiller as well as the charts so you can follow along.

At Point One: the refrigerant has just picked up the unwanted heat from the evaporator and expanded into a vapour. We know that the refrigerant there should be a low pressure, low temperature, saturated vapour, and the refrigerant at this point would be around 350 kPa or (3.5 Bar) at 5°C (41°F) an enthalpy of 250 kJ/kg (107 Btu/lb) and an entropy of 0.916 kJ//kg/K (0.219 Btu/lbm/F).

Point two: this is just after the compressor so we know it’s going to be a high pressure, high temperature, super heated vapour. From the charts we can also see it’s going to be in the superheated region. The pressure is now 1,500 kPa (15 Bar), the temperature is 60°C (140°F), with an enthalpy of 280 kJ/kg (120 Btu/lb), and an entropy of 0.916 kJ/kg/K (0.219 Btu/lbm/F). At this point we can see that the pressure, temperature and enthalpy has increased, but the entropy has remained the same.

Point three: is just after the condenser so the refrigerant has just given up some of the unwanted heat to the atmosphere. We know the refrigerant should still be a high pressure, medium temperature, saturated liquid, and that it will certainly be very close to the saturation line on the graphs. Here we can find that the pressure has remained the same at 1,500 kPa (15 Bar). The temperature has decreased as it lost thermal energy and that’s now 55°C (131°F). The enthalpy has also decreased to 129 kJ/kg (56 Btu/lbm) and the entropy has also decreased down to 0.458 kJ/kg/K (0.109 Btu/lbm/F).

Point four: is after the expansion valve, the refrigerant has been expanded so it will have dropped in pressure and temperature. We therefore know it’s going to be somewhere within the vapour dome. The pressure has reduced down to 350 kPa (3.5 Bar). The temperature has also reduced down to 5°C (41°F); that’s because it’s expanded. The enthalpy has remained the same at 129 kJ/kg (56 Btu/lbm) and the entropy has slightly increased at 0.483 kJ/kg/K (0.115 Btu/lbm/F).

The unwanted heat is removed from the condenser using fans which blow cooler ambient air across the condenser coil. in this example the fans will have total volume flow rate of 30.75 cubic meters per second (30,750 liters per second). The air temperature going in is around 30°Celsius (86°F) and the temperature out will be around 44°C (111°F). That would result in a heat transfer of 496 kW. You can check that from the difference in enthalpy between points 2 and points 3. So that difference in enthalpy multiplied by the mass flow rate of the refrigerant. The mass flow rate in this system is 3.3 kg/s (7.2 lbm/s). It’s using a refrigerant of R134a, and the compression power is 98.9 kW. You can find the compression power by finding the difference between [email protected] point 2 minus [email protected] point 1 and then multiplying that by the mass flow rate of the refrigerant.

In this example the chilled water flow rate is 15.8 kg/s (34.8 lbm/s). The temperature in, so that’s the temperature coming in from the building after it’s collected all the unwanted heat within the building, is around 12°C (53.6°F). The water temperature coming out will be around 6°C (42.8°F). That means the heat transfer for that would be 397 kW. You can check that as well by subtracting the difference in enthalpy between point 1 and point 4, and multiplying that by the refrigerant flow rate. That will give you the heat transfer.

What is Current? Electricity fundamentals