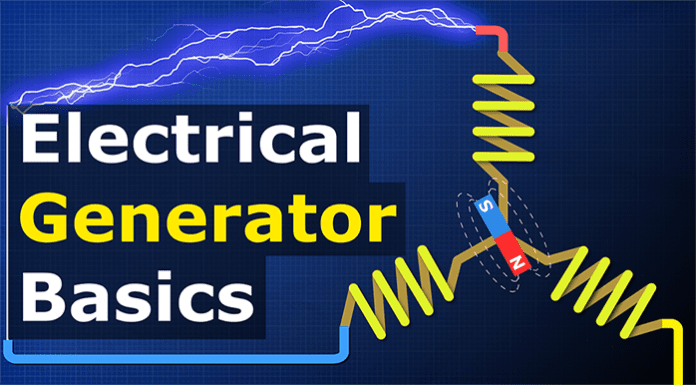 Learn the basic operation of an electrical generator, learn how magnets are used to generate electricity in  a coil of wire.

Electricity is the flow of electrons in a wire. The copper wire is made of millions and millions of copper atoms. Each atom has a free electron. This is an electron which is able to move freely between other atoms. It does move to other atoms by itself but this occurs in any and all directions, which is of no use to us. We need lots of electrons to flow in the same direction, and we do that by applying a voltage difference across the two ends of a wire. This forces the electrons to flow. If we reverse the battery, the electrons flow in the opposite direction. When electricity passes through a wire, an electromagnetic field is generated around the wire. If we place some compasses around the wire, and pass a current through it, the compasses will align with the magnetic field. If we reverse the direction of current, the magnetic field reverses and the compasses change direction. If the wire is wrapped into a coil, the magnetic field becomes stronger. Each cross section of wire still produces an electromagnetic field but they combine together to build a larger, stronger magnetic field. The electromagnet produces a north and south pole, just like a permanent magnet. If we increase the current to the coil, the electromagnetic field increases. We can also do the opposite. If we pass a magnet through a coil of wire, a current is generated in the coil. The dial on the ammeter indicates a current flowing in the forward direction, this is therefore generating a DC or direct current. When the magnet stops moving, the dial returns to zero. When the magnet is moved in the opposite direction, the current flows in the opposite way and the dial indicates a reverse current. If we move the magnet in and out repeatedly, the current will therefore alternate between flowing forwards and backwards. This is how AC or alternating current is generated. The current is continuously alternating in direction. If we move the magnet faster, a stronger current is generated. If we use a stronger magnet, then the current also increases. If we use a larger coil with more turns,  then this will also generate a larger current. Instead of using a permanent magnet, we could use an electromagnet. As we move this in and out, it will also generate an AC current in the coil. But with the electromagnet we can adjust the current and voltage to vary the strength of the magnetic field. This lets us control how much current is generated in the coil. Instead of moving a magnet in and out of a coil, we can generate a current much easier by rotating a magnet and placing the coils around this. The strongest part of the magnetic field is at the ends where the lines converge. You can see the magnetic field lines by sprinkling iron filings over the magnet. With the magnet between the two coils, there is no current generated but as the magnet starts to rotate, the strongest part of the magnetic field gets closer and closer to the coil. The coil experiences a change in intensity of the magnetic field. This will cause more and more electrons to be pushed forwards, up until its maximum intensity. Then the magnet starts to move away from the coil, so the magnetic field begins to decrease and so does the current of electrons until it reaches zero again, and now the opposite end of the magnet begins to get closer to the coil and this pulls the electrons in the opposite direction. This again reaches a maximum point and then decreases back to zero. And so, if we were to plot this current on a chart, we would get a sine wave with the current flowing from the positive and then the negative regions. This set up gives a single phase AC supply. But we have all this empty space between the coils which seems a bit of a waste, so what can we do with all this space? Well we can add more coils to create more phases, and provide even more power. If we place another coil 120 degree rotation from the first phase, this will give us a second phase. Why? Because the coil is at a different angle, so it will the change in intensity of the magnetic field, at a different time. The current is therefore going to flow forwards and backwards at a different time. That gives us another sine wave, which occurs at a different time. We still have empty space here, so we can add another set of coils at 120 degrees from the previous set, to create a third phase. If we use just a single phase, then for every rotation of the magnet, half the time the current is flowing forwards and half the time the current is flowing backwards. But with three phases, we always have a phase which is flowing forwards and we always have a phase which is flowing backwards. Which means we can utilise this to provide more power. Instead of having three separate coils and 6 wires, as the phases are always switching between forwards and backwards, we can connect the ends of the coils together. The current will then flow freely between each coil as it changes direction.

Hours between two dates and times

Seconds between two dates and times