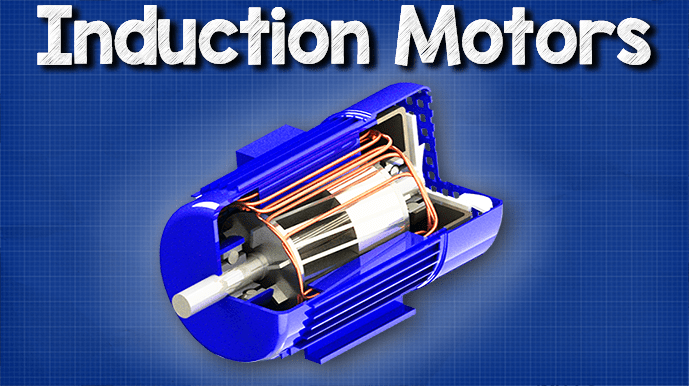 The induction motor is the most common type of electrical motor used in industry, and it’s used in pretty much everything, from elevators, escalators, pumps, fans, conveyor belts, etc. Anything that needs to be moved within a building is probably going to be using one of these motors.

They’re very popular because they are relatively cheap, they’re pretty efficient, they’re easy to install and control, they’re low maintenance, and they’ll work for many years. Even if they do break, you can usually replace these quite quickly with another one from the manufacturer straight off the shelf.

You can see two examples above. We have a belt-driven one, which is driving a fan in an AHU. There’s another which is directly coupled to a centrifugal pump, and that is pushing water around a heating system.

If you’re in engineering, or you’re looking to go into engineering, then you’re going to be coming across these motors a lot, so it’s a good idea to understand how they work.

Parts of an induction motor

If we took a typical induction motor and pulled it apart, these are the main components that we’re going to see inside of it.

First of all we have the main body, or the frame. This part is bolted down onto the floor or onto a frame. The main frame is where everything is bolted into and connected to, so this is the central reference point.

It’s also the housing for the stator. The stator is called the stator because it is stationary. Inside the stator you have all the coils, they will be wrapped around the grooves inside the stator, and we’ll have a closer look at that shortly. But the coils are wrapped around the inside of the stator frame, in loops around the stators inner circumference, and the electricity will flow through these coils. As the electricity flows through these it will generate a magnetic field, and that’s what’s going to cause the motor to spin.We’ll have a look at that in more detail in just a second.

Running through the center of the motor and the coils is the rotor. This is a shaft with an inductor attached. The inductor is affected by the magnetic field, and that will cause it to spin. When it spins, it spins the shaft, which it is mechanically attached to it, and this provides the mechanical power that we use to move things. We’re going to look at that also in a second.

There’s also a set of bearings at each end, this is connected onto the shaft. These fit inside the end shields. The bearings just ensure that the shaft rotates smoothly and with minimal friction. Obviously the shaft is going to spin at a very high angular velocity.

Then on each end we’re going to have an end shield, which will be bolted onto the frame, and that’s what the bearings sit inside. These just protect the inside of the motor from external particles entering the rotating parts. They also hold everything in place to make sure that the rotor, when it’s spinning, stays where it should be and doesn’t fly off and start to hit the stator and the coils, etc.

Then, at the back, we have a fan, and that is bolted directly onto the end of the shaft. When the shaft spins, so does the fan. The faster the shaft spins, the faster the fan spins. This is an important feature of the motor design. The fan is going to pull in ambient air and it’ll bring it into the fan blades and then force that air across the outside of the fan, to take some of the heat away.

The fins, which are sticking out all the way around the motors external casing, also conduct some of the heat away from the centre. These work by increasing the surface area of the casing, and that will help draw some of the unwanted heat out and allow it to cool down. Otherwise it will melt the insulation on the windings and cause an electrical short circuit which will kill the motor.

You can see from the thermal image, it’s much cooler where the air is first entering (left end). There is a bit of a hot spot on this one and the rest of the case is warm from the heat being generated by electrical current passing through the copper coils inside.

Lastly, at the very back we have a fan guard, and that is really just to protect the fan and also protect you and stop you cutting your fingers off.

Looking at the rotor, this type of rotor is known as the squirrel cage type. That’s referring to these conductive bars which run along its length. It’s named this just because it looks a bit like a cage you’d keep a squirrel in…. I guess? Back in the day, they just decided to call it a squirrel cage.

The squirrel cage frame has conductor bars which run from one end to the other. They’re typically made from copper or aluminium. They’ll have end rings attached to either, and this will short it, creating a circuit, and that will allow the induced current to flow through it.

Sandwiched in between the end rings are very thin sheets of laminated iron. These are maybe half a millimetre thick. These are just there to intensify the magnetic field, and they also reduce the eddy currents. You might also notice that the inductor bars are not straight, they’re skewed. This is designed to increases the torque. There is a maximum skew that you can put on these, and the angle of that skew will depend on the design of the motor.

How the induction motor works

So how does it actually work? When you pass an AC current through a wire, the current alternates between flowing backwards and forward, that’s why it’s called an alternating current, or AC. The amount of times it alternates per second is known as its frequency, which is measured in Hertz. On each cycle it’s passing between the positive and the negative, which changes its direction.

When you pass an electrical current through a wire, we know that it also produces a magnetic field around it. Watch our video on solenoids to view this magnetic field. This also changes direction with the alternating current, and the strength of that magnetic field is also going to change with the current as it alternates between its maximum and minimum value of the sine wave. As it reaches the peak, it’s at its maximum strength and then as it passes through the zero line, which is it’s minimum strength, and then it maximises again at its lowest peak also. This cycle repeats constantly 100 times per second for 50Hz and 120 times per second for 60Hz.

If we took the motor housing in the stator and we made two coils, and we placed them opposite each other in the stator, then we connected them together and passed a current through them, this will create a north and south pole. This will flip between the two coils as that passes through each cycle of the wavelength.

If we then took a three-phase supply and connected each coil to a different phase and placed the coils 120 degrees rotation from the previous coil, around the inside of the stator, then each one of these coils would reach their maximum power at a different time to the other coils. The sine wave shows which coil reaches it’s maximum, zero and minimum intensity and in which order.

That means the point of maximum magnetic field is going to be moving around the stator from one coil to the next, this will cause a rotating magnetic field and if we placed the rotar in the center of this, then the rotar will be constantly forced to rotate. We can then attached pumps and fans to the rotar and use them to do work for us.